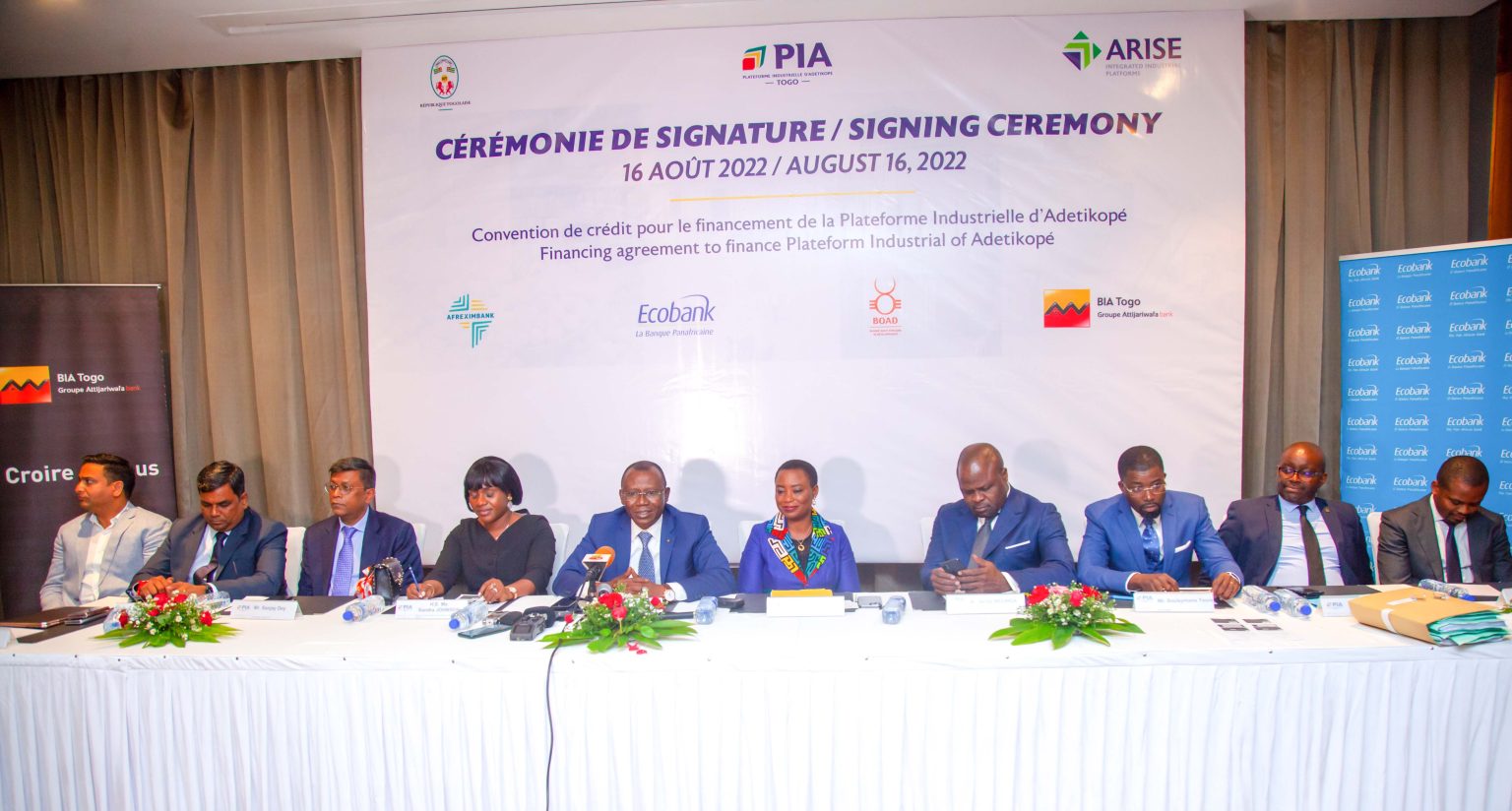 Lomé, August 16, 2022 – The African Export-Import Bank (Afreximbank) as Lead Manager, the Togolese subsidiary of the Ecobank Group and BIA Togo, Attijariwafa Bank Group, have signed a credit agreement with Plateform Industrial Adétikopé SAS (PIA) for the construction of the infrastructure of the Adétikopé Industrial Platform which covers a total area of 400 hectares. This agreement, worth a total of 145 million euros (more than CFAF 95 billion), is part of the support for the socio-economic development of Togo through the implementation of the new government roadmap 2021-2025.

The objective of the new government roadmap 2021-2025 is to make Togo a modern state with a sustainable and inclusive economic growth. Creating more than 35,000 direct and indirect jobs, the Industrial Platform of Adétikopé aims to promote attractiveness and attract investors to develop industrial and multi-sectorial activities, including the processing of agricultural products (cotton, soybeans, cashew nuts, etc.) and local mining. The project in its phase 1, houses an industrial zone; a logistics zone; a commercial & residential center; and a world-class infrastructure. It will also develop in phase 2, agricultural processing industries (cashew, pineapple, corn, mango, sesame) and modern infrastructure.

This banking pool joins the West African Development Bank (WADB), which has set up a loan of about 30.5 million euros (20 billion CFA francs) in favor of PIA TOGO. The agreement was signed on October 21, 2021, thus completing the financing plan for this important project for the Togolese economy, with a total cost of 247 million euros.  AfDB is also working within the framework of the overall bank financing of the project as a Security Agent.

“Afreximbank considers the industrial platform as an initiative in line with its objectives of promoting and facilitating the development of African industrialization and exports. This project represents Afreximbank’s fourth project in the Industrial Parks space with the Arise Group (two projects in Gabon and one in Benin), a collaboration that today represents solutions totalling approximately €257 million,” said Oluranti Doherty – Director of Export Development, Afreximbank. “Afreximbank has played a central role in the creation of various industrial parks and special economic zones across Africa, and we are convinced that these projects could prove transformative to their countries’ industrialization and export development efforts. We are pleased and proud to be working again with Arise, which has proven to be a reliable and extremely effective partner in the past,” added Oluranti Doherty.

Souleymane Touré, Managing Director of Ecobank Togo said: “As a subsidiary of the pan-African banking group with the largest presence on the continent, one of our major ambitions is to support governments in structuring and financing value-added projects. By contributing up to 45 million euros to the financing of the construction of the Adétikopé Industrial Platform, we reiterate our commitment to the Togolese State in the implementation of its socio-economic development strategy for which we collaborate with major financial players such as AFREXIMBANK, BIA and BOAD.”

“The pan-African group Attijariwafa Bank, of which we are a subsidiary, is resolutely committed to financing strategic projects for the national economy with a view to creating shared value. The participation of BIA-Togo in the financing of the large-scale project of the Industrial Platform of Adétikopé up to 15 million Euros is our contribution to the structuring of an integrated ecosystem going from logistics and warehousing to the transformation of our basic products. This vision of industrialization carried by the Togolese State is a pledge to accelerate the socio-economic development of the country”, declared Mr. Kossi DJOKOTO Deputy General Manager of BIA Togo.

Arise Integrated Industrial Platforms (IIP) is a pan-African developer and operator of industrial parks, strongly committed to making Africa prosper, through the development of its industrial sector and the creation of sustainable jobs. ARISE IIP is a joint venture between Africa Finance Corporation (AFC) and Africa Transformation and Industrialization Fund (ATIF). It specializes in integrated industrial zones, and its portfolio currently includes GSEZ (Gabon); GDIZ (Benin); PIA (Togo); SAG (Gabon).

The Adétikopé Industrial Platform (PIA) is a special economic zone serving the industrialization of Togo. It develops an ecosystem of agricultural processing and logistics on 400 hectares in phase 1. This is the result of a public-private partnership between the Togolese Republic and Arise IIP. Its total investment amounts to 130 billion CFA francs.

BIA-Togo, one of the oldest banks in Togo, is a subsidiary of the Attijariwafa bank Group, which is the first banking and financial group in the Maghreb, and is one of the largest banking groups in the African continent.

Belonging to a group of world reference, it has a complete range of banking products and services, sectoral competences and expertise to respond effectively to the expectations of its customers.

Present in more than 25 countries throughout the world, the Attijariwafa bank Group is not at its first experience in supporting the ARISE Group. A previous operation with its subsidiary Union Gabonaise de Banque (UGB), allowed to finance a similar project in Gabon, which is a reference in Central Africa.

The West African Development Bank (WADB) is the common development financing institution of the West African Monetary Union (WAMU). A public institution of an international nature, the WADB’s purpose, according to Article 2 of its statutes, is “to promote the balanced development of member states and to achieve the economic integration of West Africa” by financing priority development projects. It is accredited to the three climate finance mechanisms (GEF, AF, GCF). Since 2009, WADB has been an observer at the UNFCCC and actively participates in discussions on the construction of an international climate finance architecture. Since January 2013, it has hosted the first Regional Collaboration Center (CRC) on the Clean Development Mechanism (CDM), which aims to provide direct support to governments, NGOs and the private sector for the identification and development of CDM projects. It is committed to carbon neutrality by 2023 and is an active member of the International Development Finance Club (IDFC) which brings together 24 national, regional and bilateral development banks.