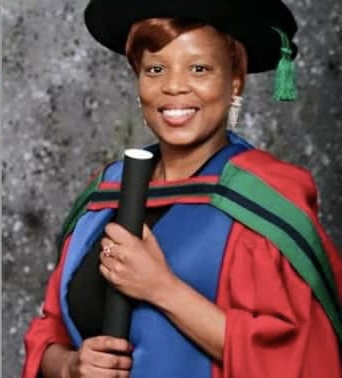 Jambo Africa Online’s Publisher, SAUL MOLOBI, profiles a seasoned professional, Dr Avela Majavu, whose self characterisation as a mere “village girl” qualifies her as a full embodiment of humility.

“I am a village girl from Centane, Eastern Cape, who has worked diligently to acquire a PhD in Chemistry. It has not been a smooth sailing road of success. I battled all manner of obstacles to enrol for a National Diploma in Analytical Chemistry and a further B-Tech in Analytical Chemistry from the Walter Sisulu University in East London. Prior to varsity,” said Dr Avela Majavu unassumingly.

Before registering at a university, she studied physical science in high school using textbooks only. So her very first exposure to conduct experimental work was at the Walter Sisulu University. “It was so fascinating and overwhelming being in a different environment and had to adjust to being taught, by new lecturers. I managed to complete in five years including in-service training. In my undergraduate journey, I never went to the library to study as the presence of many people overwhelmed me. I would go there to pick or drop books. I used to isolate myself and learn to use the opportunity to study in my room while everyone is gone.

With her insatiable desire and passion for learning, she continued with her studies to an M-Tech in Chemistry and a Doctor of Philosophy (PhD) in Chemistry at the Nelson Mandela University.

Dr Majavu is currently working as a Research and Development Chemist at Sibanye Stillwater Precious Metals Refinery, Science Communicator and Eskom Expo Science Judge (Volunteer). She is a Professional Member of the South African Council for Natural Scientific. Her key interest is to optimally utilize Platinum Group Metal chemistry skills as a specialist in her area of expertise. Her research is critical for the economy of South Africa and other countries of the world, as many countries are getting involved in mining activities and precious group metals (PGMs) beneficiation and recycling.

She has one local publication under South African Journal of Chemical Engineering and three international ones – namely, Separation Science and Technology and Minerals Engineering. She has demonstrated industrial excellence when she was nominated as a “Rock Star for Highest Performance” at Sibanye Stillwater PMR in April 2021.

She is an alumnus of Women in Mining South Africa (WiMSA) Mentees 2021 – a mentorship program that advocates for more women and girls to join this male dominated environment by breaking barriers to entry for women. And also, being a woman in mining puts her in a position to make meaningful contributions to the empowerment of other female scientists who would like to contribute to the mining space as scientists. Women in Mining South Africa supported an initiative with iWIM and Atingi, as she had been given a greater opportunity to feature her story in Women in Tech to inspire young girls especially in Africa to enter the STEM sector.

She developed an interest in being a Science Communicator and her role is to bridge a gap between the scientistific community and the public by making science more accessible to all – particularly the women and the previously disadvantaged groups.  She was featured in True Love women’s magazine and the Class of 2020 “Women are coming for everything” feature in Women in Science booklet which was published by the Nelson Mandela University. She has conducted numerous media interviews as part of her advocacy programme – these included an interview on Mhlobo wenene FM, the biggest radio station in the country, in which she encouraged girls from rural villages to pursue studies in science.  She shared her story in 2021 through the Varsity World newspaper as “Dr Avela Majavu: Village girl’s resilience in education seriously inspired Mzansi.

She is an alumnus of the Black Women in Science (BWIS) 2021fellow – BWIS is non-profit organization which is in partnership with the Department of Science and Technology. She volunteers to Judge at Nka’Thuto EduPropeller on their final innovation Expo under STEM and business categories. She is currently an Eskom Expo Science Judge 2022; her role is to conduct developmental work in terms of getting learners ready for the actual regional and international Science Fairs.

She is a co-founder and Acting Deputy Secretary General of the newly established South African Association of PhDs NPC. This association was established on  5 November 2020 and on 4 December 2021, it conducted its Annual National Congregation of Avant-Garde South African Doctors and welcoming new PhD’s holders. “Our objective is to create a platform and vibrant ecosystem that brings together academics and non academics from various universities, industries and government by influencing policy formulators in the right directions.