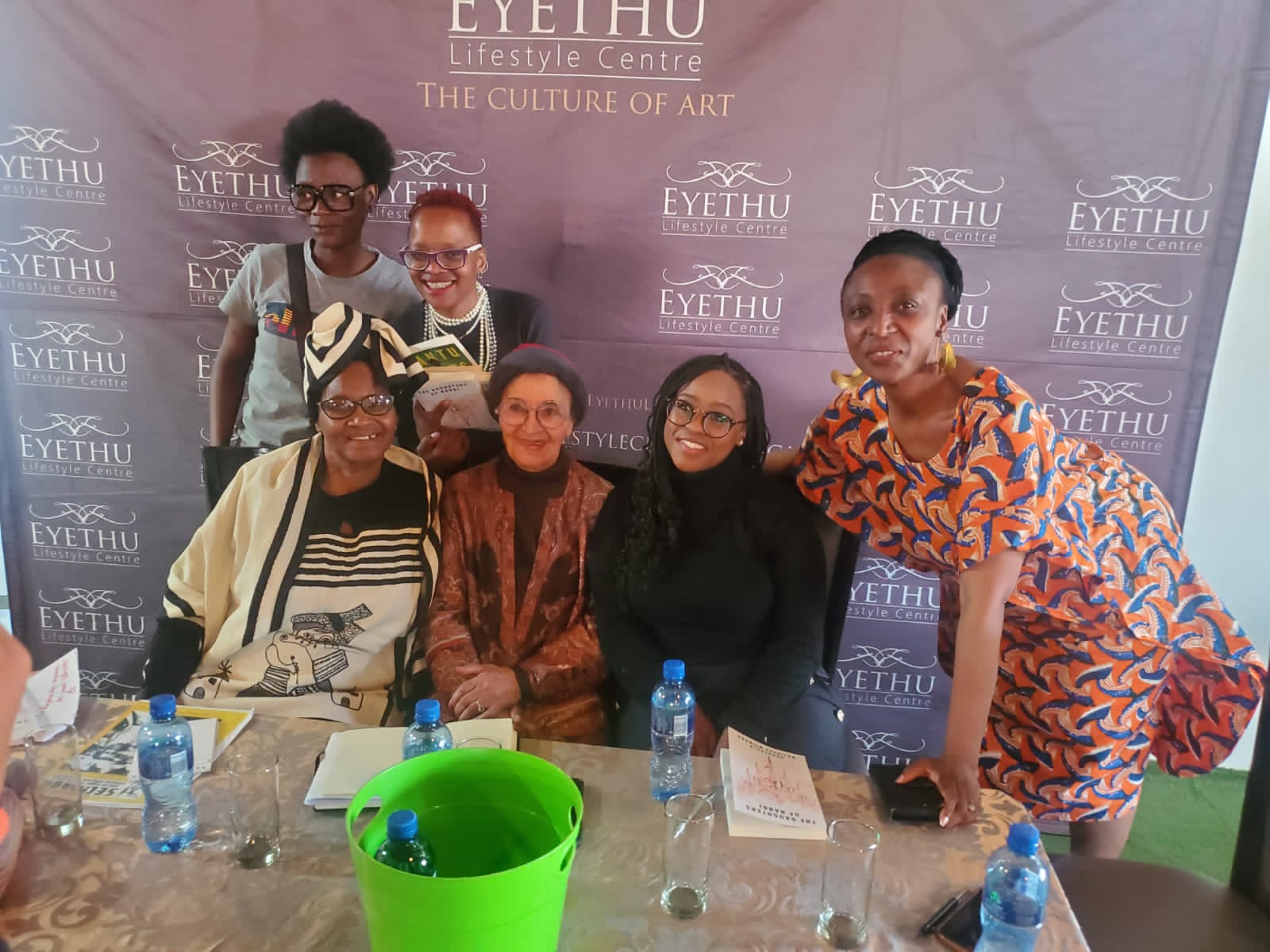 This past Saturday’s (13 August) event turned out to be a forum for harvesting innovative ideas, and a new spirit of resilience and determination thanks to an inspiring encounter with women belonging to three-generational ages. The meeting organised by Lorraine Sithole of BookWorms Book Club was addressed by a panel of distinguished guests, Sophia De Bruyn and Pauline Mohale Buyeye, and renowned authors Dr Nokuthula Mazibuko Msimang and the young Lebo Mazibuko at the Eyethu Lifestyle Centre in Mofolo Soweto, south of Johannesburg.

Aunty Sophia De Bruyn who opened the conversation by recalling how the first twenty thousand strong women’s march of 1956 was conceptualised, lobbied and organised. As the only surviving leader of that march, she elucidated how the fundraising to raise resources for transport – buses and trains, to take contingents of women around the country to the Union Buildings in Pretoria took place. At a time when there were no mobile phones and computers, the terrain for communication and traveling was not as smooth and easy as it is today.

What inspired the multitudes of women was their determination to speak with one voice representing women from various organisations, political formations, trade unions and stokvels, and saying no to the Pass Laws. The apartheid regime was led by Johannes Gerhardus Strijdom, also known as Hans Strijdom, an Afrikaner nationalist nicknamed the Lion of the North and belonging to the white supremacistfaction of the National Party (NP). Strijdom’s absence to receive the petitions brought by these women prompted the disciplined women to end the march by singing and warning Strijdom, ‘Wathint’ abafazi, wathint’ imbokodo, uzokufa!’ (You strike a woman; you strike a rock, you’ll die!). Exactly two years later on 24 August 1958 Strijdom died.

De Bruyn, while acknowledging the achievements made since 1994, spoke about the difficulties still faced by women today concerning gender inequalities and abuses at home and in the streets of South Africa, at workplaces and in hospitals. She called upon women to unite and fight back with the determination of her generation by using all the advantages available to women today.

Pauline Mohale recalled her role as a student during the uprising in 1976 and how she joined an MK cell and ended up ferrying students and youth across the borders to undergo training outside the country. Just when she decided to join those leaving the country, she was arrested that same year after a trap set up by the police in the small town of Amsterdam, close to the border with Swaziland.

After being tortured and detained in solitary confinement in the Krugersdorp and Number Four (the Fort) prisons, the police left her in a cell full of clotted blood all over her body, fingers and toes. They wanted to make sure she was living a life in hell – like electrocuting her until she started menstruating and threatening her with being thrown out of the 10th floor of the notorious John Vorster. She was finally taken to the Pretoria Maximum (Mampuru Prison), near the gallows so that she could see herself facing a death penalty and hanging.

Charged under the Terrorism Act in June 1977, Mohale was the only woman in the Pretoria Twelve trial which included Joe Gqabi, Naledi Tsiki, Jacob Seatlholo, Tokyo Sexwale, among others. Judge Justice Davidson presided over the case till October, and he fell ill. The accused wished he could die, and somehow their prayers were positively answered when the judge died a month later in November 1977.

Since Judge Davidson was alone for the trial, a retrial was ordered and it started on 17 January 1978 with a new judge, Judge Myburgh, taking over the case – and this time making sure he was with two assessors. At the end of the trial, there wasn’t enough evidence to convict Mohale, so she walked free. Sexwale and five others were sentenced to Robben Island.

Mohale suffered a number of nervous breakdowns during the interrogations, the trial and thereafter. She never received any medical treatment until after 1994 when the TRC processes started. She still suffers from that ordeal, and she remains a strong and determined woman fighting for justice and women’s rights.

It was time for a short break to absorb the experiences of the two stalwarts. When the conversations resumed, we were mesmerised by listening to Dr. Msimang reading from her new book, ‘The Daughters of Nandi,’ a fiction based on historical facts, to display the bravery of women as their roles in societal affairs are usually underestimated. As Nandi, the Queen of the Zulu Nation puts it, “I have no regrets about the life I have lived. My great loves, my great losses, are mine to tell. Regret is the mother of grief, bitterness and scorn. After all, my name is the antithesis of bitterness, I am Nandi, the sweet one. Yes, I am sweet. Until you cross me.”

Mazibuko’s ‘Bantu Knots’ is a story about the coming-of-age of a young Black woman in South Africa finding her voice. The mother-daughter relationships that are so complex to the extent that we avoid talking about in our daily conversations come alive in this book. This is sometimes a very contentious space.

Both Msimang and Mazibuko speak to the young women and youth of today to find their feet in these fast-moving times pushed by technology and personal desires. Let us learn from our past in order to better manage our future. What better occasion than this one this past Saturday?

The young generation expressed their profound appreciation of Aunty Sophia De Bruyn’s presence at such a forum during the Women’s Month.

In recognition of her commitment to the struggle of equality and women’s rights, paving the way for ordinary women to make their voices heard, Sophia Theresa Williams-De Bruyn, an anti-apartheid activist, was conferred the title of Doctor Honoris Causa of Law at the University of Johannesburg (UJ) in 2021.