Ending the Africa Month celebrations on a high note 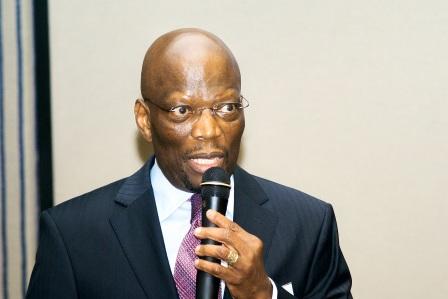 After many seminars were held not only on the continent, but across the world too, to celebrate the 58th instalment of the Africa Month celebrations, the recently established company in the Brandhill Africa stable, Brandhill Africa Institute of Public Diplomacy launched its maiden seminar to mark the last day of this epoch making date in the history of post-colonial Africa.

This webinar, whose apt theme was “harnessing the AfCFTA as one of the key building blocks for Post-COVID-19 recovery,” was held virtually on Monday, 31 May 2021.

The CEO of Brandhill Africa Institute (Pty) Ltd, Stevens Mokgalapa, said they were privileged to partner with such significant stakeholders as the Growth Diagnostics (in collaboration with the North-West University Business School); the Pretoria Chamber of Commerce and Industry; and individual business leaders and entrepreneurs from across the continent in hosting the auspicious webinar on the AfCFTA in honour of the African Diplomatic Corps and the broader diplomatic community as led by the Dean of the Diplomatic Corps, Ambassador Ben M’poko.

I can’t agree more with the CEO as I draw from my own personal experience as the former South Africa’s Consul-General to Milan (2012 to 2016), I can confirm that the event meant a lot to the Diplomatic Corps and I may further indicate I will ensure it becomes an annual event. I am the founder and Group Chairperson of this stable of companies and as such give strategic guidance while the CEOs drive operational excellence in their respective subsidiary companies. The Deputy Group Chairperson is Dr Nomalanga Sibeko, a Cuban-trained medical doctor.

The programme was co-directed by Stevens and the sassy Ipeleng Kwadi – a young lady making waves as a farmer in Brits, the Madibeng municipality, as the Managing Director of Motshotelo Farming Enterprises.

In his opening remarks, Amb Ben M’poko, Dean: Diplomatic Corps (Amb of the Democratic Republic of Congo in SA), asserted Africa’s under-reported critical role in the development of the global economy.

In her youthful voice, the affable Ofentse Nthite, appointed yesterday as the Associate Editor of Jambo Africa Online, rendered a passionate poem celebrating her motherland, Africa. She mused:

To express my endless gratitude of being an offspring of your soil.

You are a continent rich with culture and diversity and has inspired me and many others not to shy away from our roots.

I am jotting down all these words because I am proud to call myself an African.

Africa…Oh Africa! I admire your resilience and your colourful diversity and splendour

Your motherly nature and your optimistic demeanor do not go unnoticed.

You survived the impossible, you stood for something even when all guns were blazing at you.

Your growth is admirable because all that was wished upon you was underdevelopment in all aspects.

From the Atlantic slave trade that snitched away your men and women who were full of dreams and potential.

To colonization, an era which tested your character and dealt with you socially, economically and politically.

All the invasion did not tarnish your confidence.

You still maneuvered with poise and self-love.

All the entitlement that came with colonization did not break your spirit.

You thrived, despite being scattered and partitioned at the Berlin Conference.

Ultimately, you had to adhere to the new normal as difficult and as confusing as it was to your people.

The new normal came with its shortfalls, wrapped in wars, populism, division, exploitation, capitalism, poverty –  just to name a few.

The imposed laws and dramatic changes you had to deal with robbed you of your dignity and so much more was stolen away from you.

The new normal came with a high price to pay, of which debts you are still paying for till to date.

You might never regain the dignity and the strong men and women you lost at the expense of trade, but your people are now reclaiming your power by creating households’ names for themselves globally.

You might never recover economically, socially and politically from being divided and partitioned, but your people are now more than ever before fighting for unity and integration.

You might never recover from being mentally crippled and made to believe that you are inferior, but you’re surely making moves and changing the narrative one solution at a time.

Dear Africa, today we celebrate you, regardless…”

As the Brandhill Africa group’s platforms – Jambo Africa Online, Biashara Services and Products Africa (BiSPA) Conference and  Exhibition (of which this virtual seminar was part) – are about promoting “Made in Africa” service and product brands, Nicole Larissa Nelson, the founder of Made by Coco – a cosmetic company based in Johannesburg – took to the virtual podium to introduce her product line.

The keynote presentation that spoke to the webinar’s  theme was delivered by Francois Fouche, Director: Growth Diagnostics (in collaboration with the North-West University Business School).

“The promise of the new trade agreement is to make it easier to do business across the continent, but it should be seen as the start of a journey, not a single event. And we should expect decades to past before we see anything remotely reflecting something like full implementation…”

The respondent to Francois’ presentation was Piet du Toit, the President of the Pretoria Chamber of Commerce and Industry. This is a strategic ally considering the fact that it is a home to the captains of industry in the City of Tshwane which happens to be the country’s administrative capital and the host to all the Diplomatic Corps – second highest only to New York, the seat of the United Nations.

The final word came from Themba Mabena, the CEO of Mbhuduma Business Solutions who spoke about business development services as drivers of economic growth.

The seminar was highly successful as broadcast live through Zoom and social media platforms.