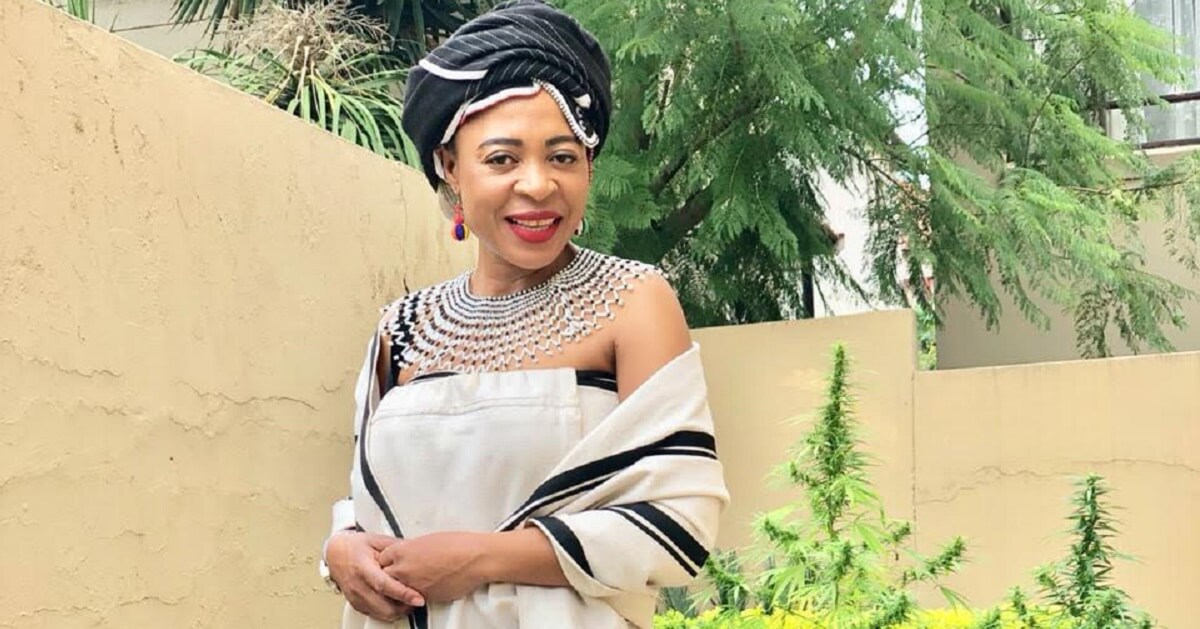 Jambo Africa Online’s Publisher, SAUL MOLOBI, profiles the inspiring and tenacious entrepreneur, Amy Mabusela, who intends building a legacy by using her wealth of academic achievements coupled with experience to disrupt the cosmetic industry in Africa which is dominated by foreign brands…

If you Google the word, nchai, the website that specialises with un/scrambling words, https://www.unscramblex.com, is the first to pop up to tell you there are 23 unscrambled words which could be constructed from these five magic letters. In Sesotho – one of the official languages in South Africa and Lesotho – the word means wealth.

“From our agrarian tradition, this word could be used to describe a good harvest,” says the sassy Amy Mabusela, the founder of Nchai & KK Holdings, a company primarily involved in the oil and gas sector; venture capital and project management services. “Good harvest means the frontiers of hunger and poverty are reversed. A good harvest means wealth. I’m fascinated by the concept of wealth because unlike richness which is short lived, wealth is inter-generational. By the way, it doesn’t only  manifest itself through material possessions, but also through such manifestations as having acquired intellectual superiority and sanity; one’s soul being at peace with itself; or one being comfortable.”

This is the personality of the Nchai brand. “One word that describes my brand is ‘wealth’. This philosophical concept means one’s life could be described as harmonious – this means simultaneous combination of all the elements of one’s social and behavioural tones into cohesive sum which, when verbalised, blend into divine chords which are pleasing to every one’s ears.”

Indeed, the word “wealthy” is a powerful word to attach to a brand. One of the thought leaders on branding, Martin Roll, has posited that iconic brands tell stories that resonate with their stakeholders and touch their lives in some way that could be fined by a single word such as freedom (for Harley Davidson); power (BMW); design (Apple); elegance (Dior); imagination (Lego); beauty (Estee Lauder); and safety (Volvo). “Nchai’s is wealth!,” Amy says matter-if-factly. “It’s about contentment.”

Although Amy adopted this word as paying homage to her grandmother who adopted her and her siblings after their parents have passed on, it provided her with a cacophony of continental implications for her. “To me the name was symbolic of Africa’s wealth – its vegetation and resources beneath its earth. And indeed, our granny instilled a healthy work ethic in all of us from that early age that there’s no time to wallow in self pity and complain the odds were against us, she encouraged us to wake up early everyday, fold our sleeves, moil and toil for our livelihood.”

The many words arising from unscrambling the word nchai may also speak to abundance that characterises Amy’s life – both academically and professionally. Although after qualifying for a Cambridge Certificate with flying colours (including notching distinctions) at the Pope John XXIII High School in Lesotho, she was forced to work as a domestic worker for a year because she neither had finances nor clinched a bursary, she never got depressed about seeing her former classmates going to universities. “I believe everything happens for a reason. One day in my conversation with my employer, she discovered about my sterling performance at school. She told me the company she worked for was offering bursaries to deserving matriculants. That’s how I got a chance to go to the university the next year.”

Usually scribes will say the rest is history. But it will be a disservice to our readers to just gloss over the achievements of this former domestic worker turned businessperson by not mentioning the wealth of her illustrious academic accolades. The bursary helped her register for a Diploma in Computer Studies at the Horizon College, United Kingdom. On completion, she then registered for Bachelor of Business Administration Degree at the Thames University still in the UK.

Believing in the principle of life-long learning, she continued bettering and honing her skills while working in South Africa. Ready to burn the proverbial midnight candle, she pursued a Managemrnt Advancement Programme (MAP) at the Wits Business School. And four years after this, she completed an MBA at the Henley Business School, University of Reading, in the United Kingdom. “This called for maximum discipline in juggling between doing household chores and raising my two children.

As the King Code on Corporate Governance made business headline news, she enhanced her currency by acquiring a Corporate Governance Certificate through the Institute of Directors South Africa, before pursuing a Postgraduate Diploma in Commercial and Business International Law (GDipLaw) which she clinched from the Wits School of Law of the University of the Witwatersrand.

The analogy of many words in unscrambling the word talks to the variety of Amy’s business interests. While dealing with skin problems she was encountering, she met a friend who worked for a cosmetics company. “Although my side hustle was selling Avon, I never thought of entering the manufacturing industry,” she remembers. “My friend kept on suggesting many skincare products from her company, but I wasn’t completely happy with the results.”

This forced Amy to become an alchemist, mixing a few chemicals and testing them on her skin. “In football language, they call this ‘the hand of God’, as I miraculously saw much improvements in my skin through the oil concoction I made.”

The Nchai Carrot Tissue Oil has strong anti-aging properties due to its rich content of vitamins A, B, C, and E. “If you are looking for an oil to even tone and give you younger looking skin,” she said proudly, “this product is for you. Using it for the face can boost dull, lacklustre skin to radiant and glowing. It contains high levels of vitamin A, powerful antioxidants. These anti-oxidants protect the skin and stimulate the skin cells and have rejuvenating properties.”

So the word cutting across her business interests is lubrication – not just for the automotive sector as the Nchai Carrot Tissue Oil is used as a lubricant for the outermost layer of the human skin. “The product isn’t just good for adults,” Amy added with a warm motherly touch, “but also for the teenagers  their skin problems may cause them to lose their self confidence.”

Amy waxes lyrical when she talks about her latest product line. “It is capable of infusing into the skin to restore the lost moisture  which happens due to evaporation,” she says without even taking a breath with passion written all over her divinely beautiful face. “It forms a protective layer on the skin and hair; helping them to retain their natural moisture levels. It helps in softening the skin tissues. Both, carrot root carrier oil and carrot seed oil have beneficial properties. Both the oils help in soothing the dry or irritated skin and help in cell-regeneration like soothing wrinkles and stretch marks.

Yes, while she was focused on retailing oil lubricants for the automobile industry, she suddenly found herself producing an ointment for skincare. She named her brand Nchai Carrot Oil. “After being satisfied with the outcomes, I decided to test it with my children. My daughter came back telling her schoolmates always asked her about what skincare product she was applying as she didn’t have acne and pimples, and her face was always glowing. My son also gave the same feedback.”

The next test market was her friends. When her son visited their friends in Lumumbashi, one of the major cities in the Democratic Republic of Congo (DRC), she gave him bottles for them. Two weeks later, friends called requesting she should send them some. “This gave me confidence I needed. I had a product that could disrupt the market.”

Amy joins a number of emerging black entrepreneurs who want to take on the industry dominated by foreign brands such as Avon for the lower LSMs and luxury brands by European and American manufacturers such as Armani and Gucci. These include two which have donned the pages of Jambo Africa Online – namely, Princess Masilo’s “Kuul by Simply African International” and Nicole Larissa Nelson’s “Made by Coco”.

These follow yesterday’s trailblazers such as Herman Mashaba’s “Black like Me”, Portia Mngomezulu’s “Portia M” and Groovin Nchabeleng/Connie Ferguson’s ” and Groovin Nchabeleng/Connie Ferguson’s “Connie Products”, which has just survived a lawsuit from Nivea over the similarity of their brand’s blue colour. “Black Like Me”, Jabu Stone’s “Jabu Stone” hair product and his sanitiser, Buja”, now fall under a growing conglomerate, Amka – owned by South African and Indian investors, adding to relevance of BRICS partnership.

When the entrepreneurial bug bit by launching Nchai & KK Holdings,, she was determined to enter the world traditionally dominated by men – the oil and gas industry. “We’re playing a major role in transforming the sector,” Amy said confidently. “Our fuel business sells refined petroleum products which include Gasoline, Diesel, Aviation Fuel and Liquefied Petroleum Gas. Within the fuels business, fuel value chain integrates the activities of logistics, marketing, supply and trading. This provides the opportunity to optimize our services.”

The company has been awarded a full wholesale license in South Africa in terms of Petroleum Products Act, 1977 (Act No. 120 of 1977) which allows them to retail petroleum products such as Diesel, Petrol, Aviation Gasoline, Jet Fuel Biofuels, Paraffin and  Liquefied Petroleum Gas. “We have a full import and export license issued by the International Trade Administration Commission of South Africa and that gives us leverage to source globally and also bulk supply outside South Africa.”

Through her impeccable stakeholder management expertise, she managed to forget strategic partnerships with such companies as Shell, Deltaland Energy. “We offer a complete turnkey service package: Nchai and KK Holdings makes sure and gives guarantee by drawing all of  its product requirements directly from the refineries and depot. We  explore all avenues which means that we only deal with major oil and gas  organizations that employ industry standard “best practices” and that  all products drawn from them all conform to the relevant SANS standards.”

Drawing on her wealth of experience from the financial services sector, the company’s bouquet of services were housed into subsidiaries such as Nchai Venture Capital and Nchai Business Solutions. This experience was garnered from working for the banking industry (where she worked for three major banks) and a major telecommunications company. Her responsibilities included attracting new sales; forecasting, budgeting and financial analysis; maintaining and growing clients portfolio; dealing with customers queries and escalating if not resolved; developing and maintaining relationships with clients; regulatory compliance; and customer relationship management.

Then the entrepreneurial bug bit. Perhaps now we’re justified to borrow the cliché: the rest is history.