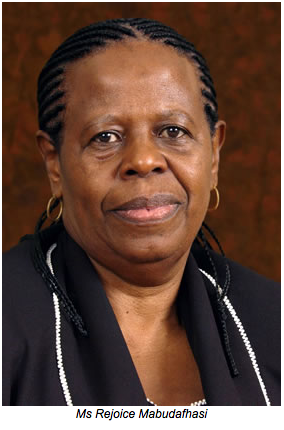 South Africa’s High Commissioner to the Republic of Zimbabwe, H.E. Rejoice Mabudafhasi, has just presented her credentials to President Emerson Mnagangwa. Considering comradely socio-economic bilateral relationship that exists between South Africa  and Zimbabwea, one may assume it wasn’t difficult for President Mnagangwa to issue the High Commissioner with an Agrément. This means Harare will be the new home for her for the next four years as she’ll be the eyes and ears of President Cyril Ramaphosa in that country.

Considering the economic challenges both countries are facing, it goes without saying that economic diplomacy will be one of the HC’s key strategic priorities.

H.E. Mabudafhasi (affectionately known as comrade Joyce) arrives in Zimbabwe with a seasoned politician and political activist with an illustrious career. She was elected as a Member of Parliament of the Republic of South Africa since 1994. She served as a Deputy Minister of Environmental Affairs and Tourism from 17 June 1999 to 10 May 2009. From 11 May 2009 until 25 May 2014 she served  as Deputy Minister of Water and Environmental Affairs. She was then appointed as the Deputy Minister of Arts and Culture from 26 May 2014 until 30 March 2017. She retired from parliamentary politics in 2017.

Besides her ministerial positions, she also served in numerous portfolios. She was the chairperson of the African Process for the Development and Protection of the Marine and Coastal Environment. She was also the Chairperson of the Mvula Trust Board and a member of the Global Programme of Action (GPA). She was also a member of the International Committee on Business Partners for Development for Water and Sanitation. She was also the co-chair of the Global Network of Women Ministers and Leaders of Environment since 2004.

She served as a member of the National Executive Council (NEC) of the African National Congress (ANC) since December 2007.

History in context: Who is HC Rejoice Mabudafhasi?

Born in May 1943, Rejoice Mabudafhasi served from 1962 to 1963 as a teacher at Tshilidzi Primary School in Soweto, south of Johannesburg. In 1965 she was appointed a librarian at the University of the North, where she served until 1994. The university was one of the most militant anti-apartheid campuses in South Africa – and some of its alumni include President Cyril Ramaphosa.

From 1983 to 1986, she served as a Secretary of United Democratic Front (UDF) Northern Transvaal region; as a member and organiser of the Federation of Transvaal Women (FEDTRAW) between 1983 and 1986; and she was a founder member and National Organiser of the National Education Co-ordination Committee from 1985 to 1986.

Ms Mabudafhasi organised rural women on various self-help projects such as gardening, and many others from 1985 to 1986.

At the height of the anti-apartheid struggle and the concomitant brutality that the illegitimate government subjected its opponents to, Joyce Mabudafhasi – who had just been released from a long spell of detention – shared her story in 1989 with Learn & Teach magazine (an anti-apartheid journal that Jambo Africa Online’s Publisher, SAUL MOLOBI, worked for as a journalist).

From 1992 to 1994 she was a National Treasurer of the National Education Health and Allied Union (NEHAWU), an affiliate of Cosatu.

She has served as a Commissioner for the Human Rights Commission from 1990 to 1992; as National Treasurer of the National Education Health and Allied Union (NEHAWU) and COSATU affiliate from 1992 to 1994; as a member of the Council of the University of the North from 1992 to 1994 and as a member of the International Committee on Business Partners for Development of Water and Sanitation between 1998 and 1999.

Here follows the article, titled “Prisoners in the own homes”, that Learn & Teach magazine carried in 1989:

Joyce Mabudafhasi is no stranger to the violence of apartheid. She was detained for the first time in 1976. Since then, she has been detained time and again. She has been beaten at protest meetings and badly injured in a grenade attack on her house. But through it all, Joyce has remained firm. She is as committed to the struggle as she has always been.

The daughter of a nurse and a church minister, Joyce was born in a village called Shiluvane near Tzaneen in the Northern Transvaal in 1943. After training to become a teacher, she got married.

When the family moved to Mankweng near Pietersburg, Joyce got a job in the library of the University of the North (Turfloop). She was the first black woman to be employed at the university.

At the same time, Joyce was a member of other anti-apartheid organisations. As a member of the Detainees Support Committee (DESCOM), she helped the families of detained people. With the National Education Crisis Committee (NECC), she worked to solve the problems in the schools. And as an organiser for the Federation of Transvaal Women (FEDTRAW), she fought for women’s rights.

All the while, Joyce was very active in university politics at Turfloop. Those were very busy times for Joyce but she was full of energy and committment.

Joyce’s work made her a target. In April 1985, she was detained and questioned by the police three times in one day after taking part in a picket in the conservative town of Pietersburg. The picket was to protest against PW Botha’s visit to the Zionist Christian Church (ZCC) at Boyne outside Pietersburg and to call for the release of all political prisoners.

Three months later, Joyce was at a meeting in a church when the police attacked. She was so badly injured that she had to take three months off work. Later the same year, there was a big consumer boycott in the Northern Transvaal. Joyce was accused of organising the boycott and was detained again, together with her friend, Joyce Mashamba.

After she was released, she began to get some very unwelcome visits — from the police. They came to search her house almost every week. Even the family’s Christmas gatherings were disturbed by that well-known knock on the door.

In April 1986, as the family lay sleeping, a hand grenade was thrown into Joyce’s house. Joyce was seriously injured and was rushed to hospital.

Even as she lay in a hospital bed, the police continued to visit her. But Joyce was still her old self. She told the police that she was “not the dying type” and that they did not scare her. Instead, they made her more angry and more determined to continue with her work.

The grenade attack was the start of many operations for Joyce. Doctors had to remove the shrapnel and glass from her body, and even from her eyes. This time, Joyce was off work for another six months. The day before she was going to start work again, she was detained under the emergency regulations.

Alone in a cell

Joyce’s detention started with five months alone in a cell at Pietersburg police station. Then she was taken to Nylstroom Prison where she again met her old friend, Joyce Mashamba. After a year, they were both transferred to Pietersburg Prison.

At the prison, Joyce found herself in good company — her friends Joyce Mashamba, Priscilla Mokaba and Maris-Stella Mabitje, who also worked at Turfloop, were also there.

On New Year’s Eve of 1988, the women decided enough was enough — they were sick and tired of being detained without trial and of being cut off from their families and community. They decided to go on a hunger strike.

The women were taken from the prison and separated, and Joyce was sent all alone to Louis Trichardt Prison, where she continued her hunger strike. Joyce lost 10 kilograms in three weeks and her kidneys began to fail. But she refused to eat until she was finally released at the end of January — with restrictions.

When Joyce arrived home for the first time in two and a half years, she found a cold and lonely house. Joyce’s four children were staying in other parts of the country and Joyce’s restrictions did not allow her to travel to see them.

Joyce’s restrictions also prevent her from being with more than ten people at one time. She must report at the police station twice a day, once in the morning and once in the afternoon. She cannot leave her home between 6pm and 6am. She cannot leave the magisterial district of Mankweng without written permission from the Minister of Law and Order.

Joyce cannot take part in the activities of many organisations or go to any meetings. And she is not allowed to enter any educational institution — which means that she cannot go back to her job at Turfloop.

We wanted to ask Joyce about her life under these cruel restrictions. But we could not — Joyce is not allowed to talk to the press. So we spoke to some of her friends instead.

Maris-Stella [may her soul rest in peace] said: “If Joyce wants to go shopping or anything else, she has to apply in writing 14 days before. It is the same thing if she has to go to Johannesburg to see her lawyers or doctors.

“Because Joyce cannot work, she has no money. Sometimes, a friend will give her a bag of mielie-meal or another friend will give her R20. Out of this, she must try to keep the home running as well as look after her sick mother. And as a mother herself, it is painful for Joyce that she is not able to support her children.”

But perhaps the most frightening thing for Joyce is being under house arrest at night. “Joyce worries all the time that there may be another bomb attack on the house,” says Joyce’s mother, who suffered a stroke when Joyce was in detention. “And I worry that Joyce will forget to report or that she will not come back. Even if s’he goes to the shop, I think maybe they have taken her away again.”

Joyce’s mother has good reason to worry about the safety of her daughter. There have already been attacks on people under restrictions. Patrick Stali, a youth activist, was attacked in Uitenhage, but escaped alive. Others were not so lucky. Activist Chris Ntuli was murdered in Natal as he was hiking to the police station to report.

Joyce lives with this fear every day — but she knows she is not the only one. Her friends, Maris-Stella, Priscilla Mokaba and Joyce Mashamba [may her soul rest in peace], have also been restricted. Joyce Mashamba has been given permission to live in Johannesburg with her husband. This is the first time since 1976 that they have been able to live together.