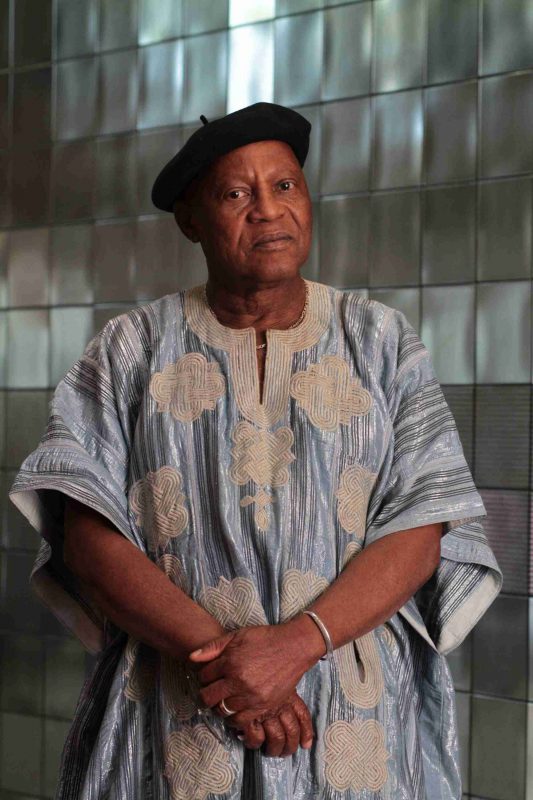 Prof Pitika Ntuli’s ground-breaking exhibition ‘Azibuyele Emasisweni‘ (‘Return to the Source), curated by Ruzy Rusike, is to be presented physically for the first time at the Oliewenhuis Art Museum from 4 October to 4 December 2022.

Whilst the exhibition consisting solely of bone sculptures, was initially launched online due to the COVID-19 pandemic, this is the first time that it has been presented physically. As the title suggests, Prof Ntuli advocates a return to the ‘source’ of African spiritualism and knowledge as a way to reconnect with human ethics, the essence of existence, and, of course, nature. Comprising of 45 bone sculptures (each with their own praise song), Prof Ntuli uses bones to ‘divine the state of the nation in a season of anomie’.

Prof Ntuli’s chosen material, animal bones, and approach – that of a Sangoma allowing the material to guide him – invokes ancient African indigenous and spiritual knowledge systems. However, the viewer’s engagement with the sculptures will take place virtually on a multi- media platform, where images of them will be seamlessly paired with words, songs and voices.

The words and voices of Sibongile Khumalo, Simphiwe Dana, Zolani Mahola, Yvonne Chaka Chaka, Gcina Mhlophe, Napo Masheane and other respected musicians, poets and writers, can be heard and read, while viewing wrap-around footage exploring the details of the haunting animal bone sculptures. This makes for an unforgettable visual and audio experience. The first of its kind, it has been produced and conceived by the Melrose gallery, Ntuli and curator Ruzy Rusike. It was motivated by the limits COVID-19 and social distancing have placed not only on South Africa’s annual art festival but the viewing of art in person.

As a proclaimed healer, Prof Ntuli aims to use the animal bones to explore and ‘treat’ contemporary problems; from issues plaguing the state of the nation to the strife caused by COVID-19. The eighty-year-old artist has been circling pertinent issues as an academic, writer, activist and teacher but as the title of the exhibition suggests, he is returning to ‘the source’ of his expression. In turn he is encouraging society to return to the ‘source’ of African spiritualism and knowledge as the means of resolving corruption, greed, slavery and poverty. Above all, the bone sculptures –a result of Prof Ntuli teasing out human features from the animal skeletons – articulate his desire for humankind to reconnect with nature.

“I do not copy nor work like nature. I work with nature. Bones are vital, as in imbued with life, and it this life that they possess that possesses me when I work. We are partners. Bones, like wood, have definite forms to work with. I do not oppose their internal and external directions, I externalise their inherent shapes to capture the beauty and the truth embedded in them, in other words I empower the bones to attain their own ideal,” observes Ntuli.

Given the novel sculptures and haunting anthropomorphic shapes and Prof Ntuli’s standing as a respected artist, activist and academic – he was awarded the lifetime achiever award in 2013 by the Arts & Culture Trust – Azibuyele Emasisweni, (Return to the Source) was expected to be one of the main highlights on the visual arts programme at the National Arts Festival, which usually takes place in Makhanda.

When it was announced the festival would have to transform into a virtual one, the Melrose gallery, Rusike and Prof Ntuli worked at delivering more than just a gallery of images of sculptures.

It is anticipated that these ‘artistic replies’ will greatly enrich the viewers’ experience of the exhibition. In light of the COVID-19 pandemic which is impacting so profoundly it is likely some of the responses will contribute to ongoing discussions and debates about healing.

“Bones have a special potency and subtle spiritual energies; their endurance is legendary. We know who we are, and where we come from as a result of studying bone fossils. Bones are the evidence that we were alive 3.5 million years ago, and they are carriers of our memories,” says Prof Ntuli.

Azibuyele Emasisweni doesn’t only lead the viewer back in time but through a unique and original use of material, form and symbolism reflects on the spiritual wasteland that might define this era, thereby collapsing those hard lines that were thought to divide ancient and contemporary concerns and art.

Azibuyele Emasisweni, (Return to the Source) will be opened on June 25 by the Minister of International Relations and Cooperation, H.E. Dr Naledi Pandor, at 18h30 (CAT). It will run until August 2.

The exhibition can be viewed on www.themelrosegallery.com and other content on www.nationalartsfestival.co.za

“Bones are vital to healing as well as for the process of divination. I am a healer. I throw bones to divine the State of the Nation in the season of anomie!” – Pitika Ntuli

“In Art, the creative act is a titanic battle between flesh and spirit. Each artwork is a diversion of the flesh, the body. Each time the artist dies, a new work is born, or rather the opposite: each time a work of art is born the artist dies a little. A little death invokes a greater desire to live and thus creates another artwork. When the artist dies finally, she continues to live through her offspring – her children and her artworks!” – Pitika Ntuli

“I do not copy nor work like nature. I work with nature! Bones are vital, as in imbued with life, and it this life that they possess that possesses me when I work. We are partners. Bones, like wood, have definite forms to work with. I do not oppose their internal and external directions, I externalise their inherent shapes to capture the beauty and the truth embedded in them, in other words I empower the bones to attain their own ideal,” – Pitika Ntuli

“Art is about exploring potentialities both of the material and the Self in its emotional, rational and spiritual dimensions of Being! Is it foolishness, obstinacy, foolhardiness, or is it crass perversity to continue to carve a delicate bone piece for hours and hours, for months on end, knowing that it could break into pieces at any time? Is the agony of the thought, the ecstasy of achieving an accomplished work of Art, as a step toward creating the ultimate masterpiece, worth it?” – Pitika Ntuli

“The influence of Jazz runs through my bloodstream. Improvisation, as in melding different objects on a single work of art, comes naturally to me,” – Pitika Ntuli

“As an artist, Pitika, you release the spirit and the story that has rested deep in the bones, and you make the silence of bones – which have no fleshy parts like eyes, mouths, tongues – speak and sing,” – Homi Bhabha

“This exhibition is in the tradition of our ancestors and the vision of the Biblical prophet. Pitika Ntuli has made his creative breath enter discarded bones, and they come to life. Pitika is the poet of resurrection, the spirit that once imbued all the great sculptures and pyramids of the ancient Egypto-African Civilization,” – Ngugi wa Thiong’o

“From unwanted animal bones and other remains, Pitika Ntuli has articulated remote forms of spectral lives with outstanding clarity. The ancestral past has returned to challenge both the artworld and artists, urging them to consider the fragile state of the contemporary,” – Shaheen Merali

“Azibuyele Emasisweni (Return to the Source) is a significant exhibition for many reasons. It is in essence an important museum show engaging on African spirituality, indigenous knowledge systems and healing and yet it is to be presented online. It presents 45 sculptures created by Pitika Ntuli, the artist and spiritual healer created from the bones that he uses to ‘divine the state of the nation in anomie’,” – Ruzy Rusike

Following in the tradition of the ‘Renaissance Man’, Pitika Ntuli is a true artistic, political and academic polymath. Interested in exploring the contradictory relationship between tradition and modernity, Ntuli’s witty and dark reflections on our society are captivating and visionary.

He was born in 1940 in Springs and grew up in Witbank in Mpumalanga. While a teacher, artist and critical thinker living under the threat of apartheid in the sixties and seventies, Ntuli was forced into exile in Swaziland and arrested and made a political prisoner until 1978, when international pressure forced his release to the UK.

Having already completed an MFA at Pratt Institute in New York in 1977, he finished an MA at Brunel University in London, in 1985 after which he lectured art at various international and South African universities including; Central St. Martin’s College of Art and Wits University. He was an artist in residence in the 1980s and ‘90s at schools and colleges in London. Among many other leadership appointments at South African universities, he served as Deputy Vice- Chancellor at the UDW.

His contribution to the development of arts and culture in South Africa has been immense. He served as director at the Sankofa Institute for the African Renaissance and, Fellow of the Mapungubwe Institute, among many other fellowships. He was awarded the Arts and Culture Trust – Lifetime Achievement Award in 2013 and the City of Johannesburg named him a ‘Living Legend’ in 2012.

He has curated several exhibitions. In his capacity as an artist he has staged numerous solo exhibitions in South Africa, Germany and the United Kingdom.

Primarily a sculptor, Pitika’s work expresses a sense of haunting loneliness – a distress at the pillaging of a continent and culture through the lens of post-colonialism. His stark skeletal structures are created in any physical medium he can find: metal, wood, stone, and bone and can range from small to monumental works in granite that weigh in excess of 19 tons.

“In Art, the creative act is a titanic battle between flesh and spirit. Each artwork is a diversion of the flesh, the body. Each time the artist dies, a new work is born, or rather the opposite: each time a work of art is born the artist dies a little. A little death invokes a greater desire to live and thus creates another artwork. When the artist dies finally, she continues to live through her offspring – her children and her artworks.”

While there is an element of darkness on display in his work, there is a strong sense of wit and tongue-in-check irony present in each of his sculptures. Pitika is also a poet, often combining classical Eurocentric form and clichés when discussing the destruction and pillaging of the African culture and landscape.