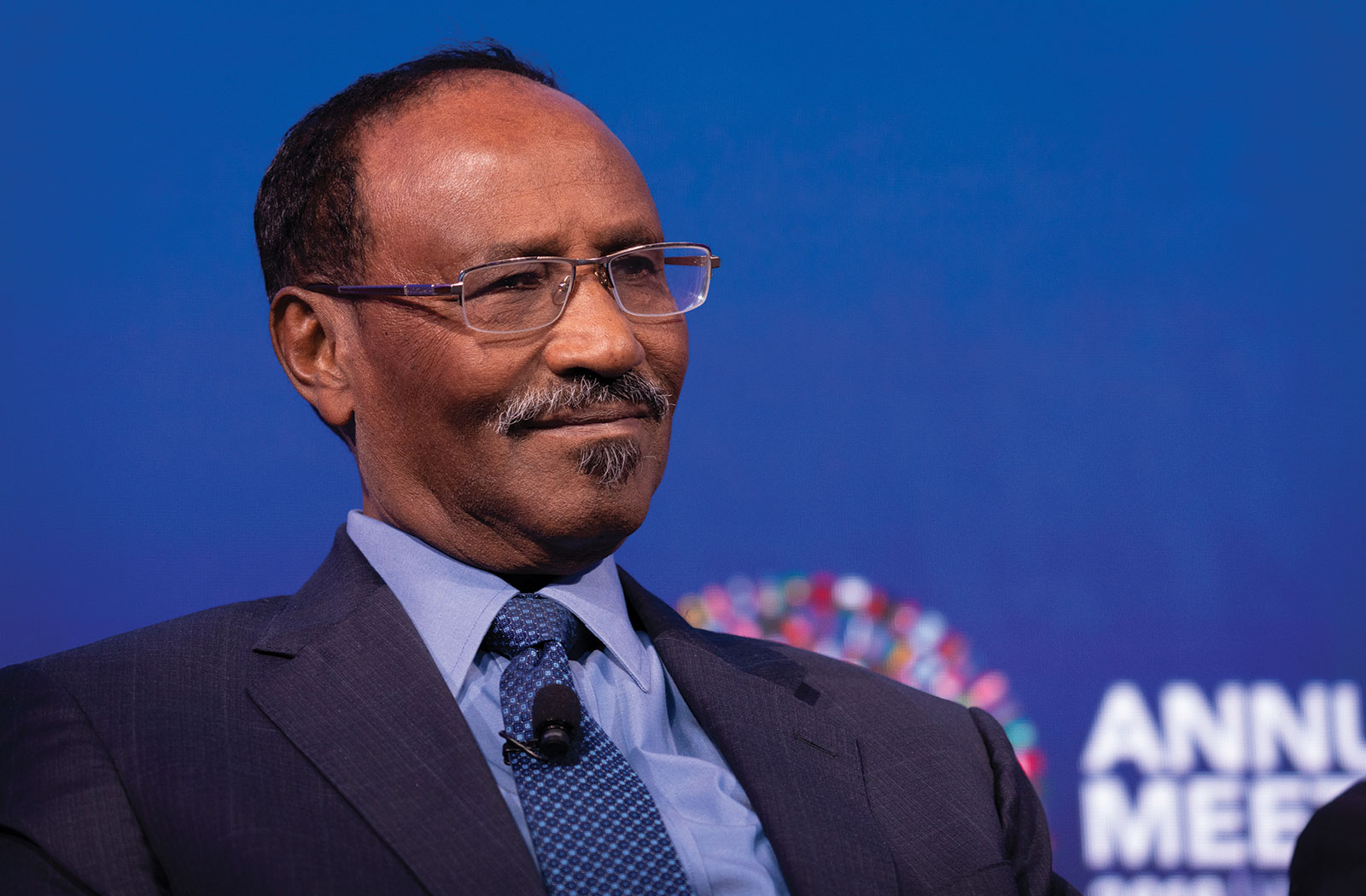 A big challenge for fragile states is to hold on to their most valuable asset: people. More than 1 million Somalis have fled their country in recent years, many choosing ramshackle refugee camps in neighboring countries over the incessant instability and conflict back home. But for Abdirahman Dualeh Beileh, Somalia’s finance minister, years abroad helped prepare him for a key post in a country that had virtually no functioning public institutions for more than 20 years.

After three degrees from the University of Wisconsin–Madison and a long stint at the African Development Bank (AfDB), Beileh was beckoned back to Somalia in 2014 to help the country get on its feet again. He served first as minister of foreign affairs before being named finance minister in 2017. Decades of devastating conflict have left Somalia with vast needs, and Beileh has focused on restoring trust in Somalia’s government to secure the resources needed to rebuild.

In addition to his role as a public servant, Beileh is known for his talent as an artist and songwriter. In this interview with F&D’s Bruce Edwards, Beileh says cultural expression has been a unifying force in Somalia’s fractious history and plays an important role in its development.

F&D: Could you paint us a picture of the place Somalia is emerging from?

ADB: Somalia had no recognized government for 20 years. There was a total lack of institutions, a total suspension of law and order. Everybody went back to their roots, back to their clans where the elders are in charge of small communities. If you don’t have a recognized central government, schools, or anything binding these communities of small clans and subclans, then you suddenly feel that you don’t exist anymore. We were saved by our women and elders, who helped ease tensions between communities. But we sobered up when we saw that the country was slipping away. We realized that people were leaving, and a country cannot exist in a vacuum.

F&D: What was the turning point?

ADB: The turning point was 2012, when the first government was elected in a manner that resembled normalcy, and the international community recognized that. Since then we’ve been climbing a very steep mountain, and we’re heading for the summit.

F&D: Insecurity has been a long-standing issue.

ADB: Security is always a problem. But when we compare where we are today and where we came from, I think it’s tremendous that we were able to make it this far.

There are still some security problems, some terrorist elements in Somalia. But by and large, we have rules that guide our economy nationwide. I think we have the common agenda worked out: one nation, one economy, and one budget. We’re not there yet, but with the help of the international community, we’ll get there soon.

F&D: Among your many priorities, which ones are the most pressing?

F&D: What is the size of Somalia’s debt, and why have you not had access to the financial resources of the international community in the past?

ADB: The total estimated debt is about $5.3 billion. No country can have access to international financial institutions or other concessionary or grant resources as long as it is in arrears. So the Somali government’s clear strategy has been to put every effort into clearing its arrears through the Heavily Indebted Poor Countries Initiative. Once the debt is relieved, we will be able to benefit from the grant resources of the IMF, the World Bank, the AfDB, and other institutions. These resources will be used in rebuilding the country, which will, in turn, generate more jobs. My country is a youthful country, with young people making up 70 percent of the population. There are currently very few jobs for them. Creating more job opportunities is also a top priority.

F&D: After so many years without a functioning government, how do you regain people’s trust in government institutions?

ADB: To a normal person working in a normal country, it is impossible to imagine what it is like to lose everything—to lose institutions, records, even your history of governance. It is simply unimaginable.

We have lived through this. It is not easy. At some point, some of the ministers had no offices, no staff. But we now have a functioning government. We have been able to agree on all the bills that will govern our finances, taxes, and customs. Some of them have already been harmonized, and we are working on others with the help of the IMF and the rest of the international community.

F&D: There is now a very large global Somali diaspora. How closely tied is that community to the community within Somalia?

ADB: The diaspora for Somalia has been a blessing. They contribute significantly to our economy, bringing their businesses and their skills back to Mogadishu—not to mention their remittances. I would say 80 to 90 percent of Somali families were fed during our period of difficulty thanks to the diaspora community. And so I cannot overemphasize its value for our country.

F&D: Where would you like Somalia to be, say, five years from now?

ADB: If the current trajectory holds, we can be a middle-income country. It sounds like an overstatement, but knowing the Somali people and their acumen and resilience—you name it, they have been through it. If you can survive all these challenges, if you can build malls and businesses in places like Minneapolis, London, Columbus, and Nairobi, then you can do that in Somalia.

Five years down the road, we have to be a country with a self-sufficient government. We should not be asking for handouts. In five years, the government’s budget must be funded by internal resources. We will still require investment in Somalia, because the country’s infrastructure has been totally destroyed.

F&D: You’re well-known not only as an engaged public official, but also as a distinguished artist and songwriter. Do you believe that art and culture can play a role in the development of the country?

ADB: Yes—when we lost everything else, the culture and the letters remained. And it is Somali culture to articulate everything through the art of poetry and songwriting. So I am one among many. I don’t think I can say that I am a great artist. It is just when my emotions reach a certain level, then those feelings find expression in song.

I’ll give you an example. When I worked for the AfDB, I would go to African countries and participate in meetings where Africans congregated, and Somalia was not there. The chair was there, the flag was there, but there was no representative. And then I would recall how strong Somalia was when I was growing up. I needed to express the emotion that this evoked in me. And so I did that through song.