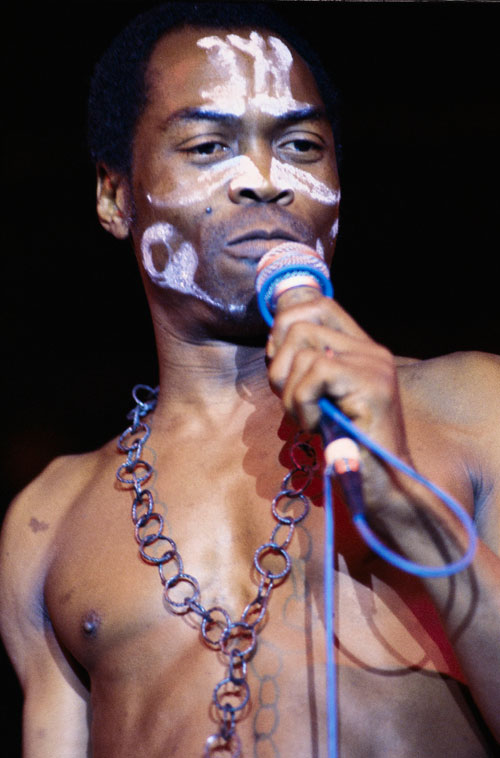 He was the strange one, the weird one, he called himself ‘Abami Edo’. His followers sometimes called him the Black President. He was once described as Bob Marley and Che Guevara rolled into one. But According to a prominent New York City museum director, for over thirty years, until 10 years ago, the “most important cultural figure in Africa in the past 100 years” was virtually unknown in America outside of the African-American community.

Which is not surprising, given the kind of artist Fela Anokulapo Kuti was, and the cultural/artistic ideas he espoused. Unlike Marley, his songs could last anywhere from 15 minutes to an hour, which rendered his music very radio unfriendly. Asked once by a Western journalist why he could not record a three-minute track, he replied that it was impossible for him. Anyway, he retorted, could anyone ask that of Beethoven?

The Guardian Newspapers’s Peter Culshaw says in the 1980’s Motown wanted to set up an African label and the company offered Fela a million-dollar deal. This despite his stubborn refusal to play old material, which would ensure that live audiences would never hear his hits. Writes Culshaw: “Rikki Stein, one of [Fela’s] then managers, was hugely excited and flew to Lagos to discuss the deal. Stein says that Fela’s response was to contact the spirits via his personal magician, Professor Hindu. The spirits refused to let him sign for another two years and Fela further insisted on only leasing his back catalogue.” Stein goes on to say: “Even then, Motown went along with, but after two years, in April 1985, the very month that Fela was about to sign, the Motown guy got sacked and the deal was off.”

Sir Paul McCartney, the Beatles megastar, was in Lagos in the late seventies and saw Fela on stage for the first time. It was the best thing he had ever seen. “When Fela and his band eventually began to play, after a long, crazy build-up, I just couldn’t stop weeping with joy. It was a very moving experience.’

McCartney then floated the idea of recording with some of Fela’s musicians, but when Fela caught wind of this, he denounced McCartney from the stage for trying to steal black music.

Variously called a musical visionary, rebel extraordinaire, pan-African revolutionary, polygamist, prodigious dope smoker and a slew of other epithets both good and bad, Fela in many ways was

hard to define. What is certain though is that Fela the inventor of Afrobeat (a potent brew of jazz, American funk and traditional Yoruba rhythm); when few were prepared to speak up for the downtrodden and dehumanized in late 20th century Nigeria, he threw all caution to the wind and called the monster by its true name, to its face. For that, he paid a heavy price: harassed, beaten and tortured by the authorities, he was jailed more than 200 times.

Fela was born Olufela Olusegun Oludotun Ransome-Kuti in 1938 in Abeokuta, a small town north of Lagos, the former capital. His family is described as upper middle class: his father was an Anglican priest, as was his grandfather. His mother was a celebrated feminist and aristocrat who had gone to the Soviet Union to receive the Lenin Peace Prize and also had met China’s Chairman Mao. His two brothers were well known doctors in Nigeria. Fela was also first cousins with Wole Soyinka.

Sent to London in 1958 to study medicine, he decided to study music instead at Trinity College of Music, the trumpet being his favourite instrument. He formed the band Koola Lobitos and in 1963 patented Afrobeat, a fusion of highlife, funk, jazz, salsa, calypso and traditional Nigerian Yoruba music.

In 1969, Fela and his band spent 10 months in Los Angeles in the United States. While there, Fela discovered the Black Power movement through Sandra Smith (now Sandra Izsadore), a follower of the Black Panthers. The visit heavily influenced his political views, as well as his music, resulting in Fela renaming his band Nigeria ’70.

Having attracted the attention of the US Immigration and Naturalization Service regarding the lack of work visas, Fela and his band had to beat a hasty retreat home, but not before recording the highly regarded “’69 Los Angeles Sessions”.

Back home in Lagos, the band changed direction; love themes went out the window and hard social issues became the sole preoccupation. It was the beginning of an amazing transformation. Fela declared a Lagos surburbian commune sovereign territory – in effect independent of the Nigerian state. He called it the Kalakuta Republic, essentially a recording studio, and a sprawling compound which became home to the band and it’s numerous hangers-on. He leased a well known hotel nightclub, named it Afro-Spot and later christened it the Afrika Shrinel. It quickly became the ground zero of Fela’s cult following in Nigeria and West Africa. Each newly leased nightclub (Fela kept moving around Lagos) became a place of pilgrimage for fans as well as a stage on which many international pop stars and other notables encountered Fela at his best.

It was at the Shrine that he also conducted his famous “Yabis”; consciousness-raising word-sound Yoruba traditional rituals, with himself as Chief Priest. Fela also gave himself a new name: “Anikulapo”, meaning “He who carries death in his pouch”. He was quoted as as saying,”I will be the master of my own destiny and will decide when it is time for death to take me.” He dropped the “Ransome” part of his surname asking, ” Do I look like an English man?”

Scoring hit after hit, Fela quickly became not just another Nigerian music superstar but a political dissident and cultural phenomenon. His bitingly eloquent public diatribes against government corruption and incompetence, and his habit of naming names and mocking or insulting his victims in song proved too much for Nigeria’s successive military strongmen. Starting in mid to late 1970’s, raid after raid by the military rained on the Kalakuta Republic.

Following Fela’s release of the hit album “Zombie” in 1977, which was a scathing attack on the military and it’s zombification of the soldiery and by extension, of society itself, the government struck. A thousand soldiers attacked the Kalakuta Republic, handing Fela a severe beating and throwing his elderly mother (whose house was located opposite the commune) out a high window. She later died from her injuries. The commune was burned, and Fela’s studio, instruments, and master tapes were destroyed. The Shrine also suffered the same fate. Fela believed that had it not been for the intervention of a commanding officer, his death would have been a certainty.

The tragedy only made Fela stronger and more defiant. He led a march to a military barracks at which he symbolically condemned the then current dictator, General Olusegun Obasanjo by presenting his mother’s coffin. Obasanjo is now one of Africa’s elderly statesmen. (He was also Fela’s former primary school classmate).

The following year saw Fela scandalising Nigeria by marrying 27 of his dancers, singers and composers at a single ceremony. Apparently it was to make them respectable, which was consistent with his progressive, if eccentric, agenda, as women entertainers generally had little  social status in Nigerian society.

He later divorced all of them, reportedly claiming that marriage causes jealousy and selfishness, and that no man had the right of ownership over a woman’s body’s natural.

That same year Fela was deported from Ghana after rioting broke out during a concert in Accra, caused by the playing of the “Zombie” song by the band.

Despite the setbacks, Fela upped the ante by forming a political party, the Movement of the People (MOP), “to clean up society like a mop”, under the banner of “Nkrumahism” and “Africanism”.

The following year, 1979, as part of Nigeria’s first elections for more than a decade, Fela put himself forward for President but his candidature was refused. By this time he was a full blown radical Africanist, having again created a new band called Egypt ’80, embodying the idea that Egyptian civilization, knowledge, philosophy, mathematics, and religious systems were inherently black African and must be claimed as such. ” I have to make Africans aware of the fact that Egyptian civilization belongs to the African. So that was the reason why I changed the name of my band to Egypt 80.”

Throughout the 80’s Fela continued making superb music while suffering the blows of brutal successive regimes brooking no opposition and indifferent to the misery of the poor and marginalised. He was seen as the only one who could defy power and speak truth to it. He was fearless.

Eventually, the beatings and jailings took their toll. By the early 90’s Fela had noticeably slowed down his musical output. One of his last projects was the anti-apartheid “Beasts of No Nation” album. The cover showed U.S. President Ronald Reagan, UK Prime Minister Margaret Thatcher and the then South African State President PW Botha as vampires, blood dripping from their fangs. The title reportedly derived from Botha’s statement that “this uprising [against the apartheid system] will bring out the beast in us.”

Whispers about Fela began surfacing, about a disease that he had contracted and for which he was refusing treatment. Some said it was AIDS, but others, including women he had been associated with, scotched the rumours. Ironically, Fela had been reported to have publicly declared HIV/AIDS as a white man’s disease.

It was on 2 August 1997 that Nigeria and the world heard that Fela Kuti had died. To the end, Fela had refused to be tested to determine the cause of his weight loss and skin lesions. Following a family decision after Fela’s passing, his brother, Dr Beko Ransome-Kuti, publicly disclosed the cause of death. It was an act which one commentator said “allowed Aids awareness in Nigeria to leave the dark ages’. In that sense, Fela’s death paradoxically helped save a lot of lives.

More than a million mourners filled the streets of Lagos for the funeral. According to his son Femi Kuti: “For two days, people didn’t do any work in Lagos! This is the first time in the history of Lagos they have not had a complaint of robbery, rape or anything. Because all the robbers, the bad boys, they loved him, you know? Everybody was busy at the funeral.”

His other son Seun, who now helms his father’s old Egypt 80 band, says Fela “was a gift, an inspiration to Africa. There will never be another like him. But things in Nigeria are even worse now, and however hard it is to live up to his legacy, we have to carry on the fight for liberation and consciousness.

“There are a lot of things about Fela’s life and work that are fascinating on a purely aesthetic level,” said Michael Veal, a professor of ethnomusicology at Yale University and author of ”Fela: The Life and Times of an African Musical Icon.” ‘

“His music is great. He was a very charismatic performer. Visually he was very striking. But at the same time, while all this interesting aesthetic stuff is happening, you’ve got someone who has really put their life on the line to speak as a voice for the dispossessed and to dramatize the struggle of his society.”

To read about the resuscitation of Fela Kuti’s memory on the world stage, check out “FELA! On Broadway”. This hit musical took the US by storm, winning three Tony Awards in 2010.

Catch “FELA AND KALAKUTA QUEENS” live at the State Theatre – in Pretoria, South Africa – from 7 to 30 September 2020. You will experience the life of the legend Fela Kuti and his radicalism! You will also experience the women that were an integral part of his band in their uniquely African identity through fashion and dance! The show is directed by Bolanle Austen-Peters.

Book online through WebTickets and pay in a Pick n Pay store.