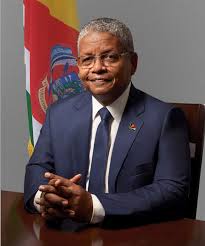 These included the following:

Mr Hassan started his career in 2004 as an Assistant Trade officer and continued to work in the Trade Department where he rose to the post of the Director General in 2017.

His appointment as Deputy CEO SFA took effect from 1 December 2021.

President Wavel Ramkalawan has announced the appointment of Mr Sheils Barra as the new Chief Executive Officer of the Landscape and Waste Management Agency (LWMA).

This post had been vacant since the appointment of Mr Flavien Joubert as Minister.

Mr Barra started his career in 1994 as a Biochemist in the Seychelles’ Ministry of Environment and where he was Assistant Director of Environment Assessment & Pollution Control before he left Seychelles to settle in Australia in 2003.

While in Australia Mr Barra pursued his career in environment, waste management and public health. Most recently he had served as Waste Management Coordinator of the Cook Shire Council, in Cooktown.

His appointment as CEO LWMA took effect from 6 December 2021.

·     Appointment of the new Chief Secretary of the Public Service Bureau

President Wavel Ramkalawan has today announced the appointment of Mrs Sheila Mohideen as the new Chief Secretary of the Public Service Bureau formerly known as the Department of Public Administration (DPA). Government has taken the decision to change the mandate of the DPA from administrative to oversight and modernisation of the civil service in the country.

As part of the reform, the Guy Morel Institute will have as one of its mandate the role of being the public service college of the nation.

Mrs Mohideen has extensive experience in the field of education, professional development and capacity building.

Over the past 30 years she has held various positions in academia as well as being engaged in Strategic Management and Leadership Development.

Previously she held the post of Executive Director of the Guy Morel Institute (TGMI).