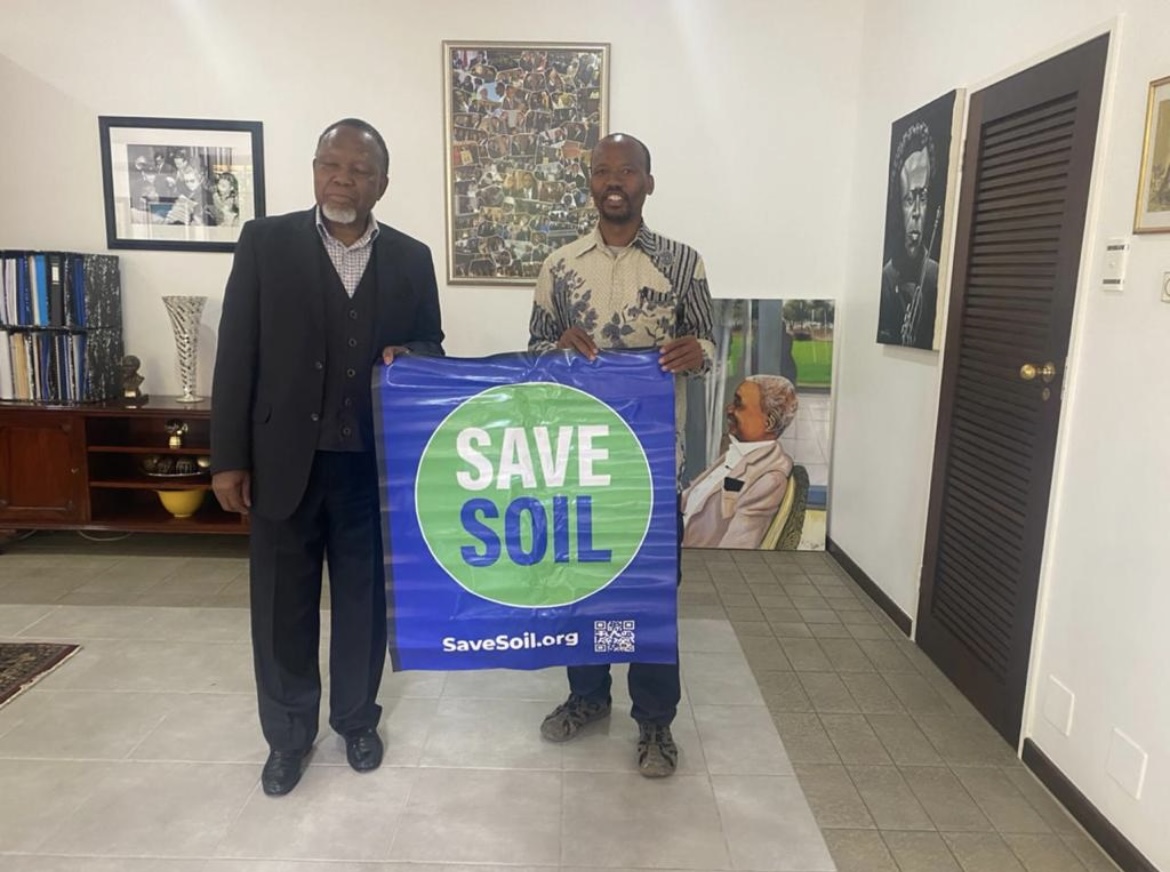 Business man and Save Soil ambassador, Tseke Nkadimeng, is embarking on a walk throughout South Africa to raise awareness about the Save Soil initiative. Save Soil is a global movement launched by Sadhguru, to address the soil crisis by bringing together people from around the world to stand up for Soil Health, and supporting leaders of all nations to institute national policies and actions toward increasing the organic content in cultivable soil.

Nkadimeng, who is the CEO of Eco Africa Energy, is walking together with former uMkhonto we Sizwe (former ANC’s military wing) MK) veteran, Parker Mamabolo, and their journey officially kicked off on Wednesday, 27 July 2022, are expected to complete their mission in eight months.

This intensive walk, which took off in Dullstroom will see them going through to Durban in KwaZulu-Natal; Bloemfontein via Bethlehem in the Free State province; the Eastern Cape’s cities of Middleburg, Queenstowns and Gqeberha; Knysna and Cape Town in the Western Cape. In all in all, their journey will see them walk through such cities as Calvinia, Upington, Khathu, Vryburg, Mahikeng, Thabazimbi, Tzaneen, Polokwane, Jane Furse, Kempton Park, Johannesburg, and finally Pretoria in Tshwane.

Speaking from Machadodorp, also known by its official name of eNtokozweni,  is a small town situated near the edge of the escarpment in Mpumalanga province, Nkadimeng said that they would be walking an average of 40 kilometres per day. “We will be assisted by Musa Skosana and Ustinov ‘Bimbo’ Kgosane who will be driving a 2017 Toyota Landcruiser 79. Part of our plan is to visit the towns and villages and solicit citizen support for the initiative and to ask citizens to sign a petition in support of the Save Soil movement.”

He added that he “was inspired by one of the world’s best-known spiritual leaders, Sadhguru, who embarked on a 100-day motorbike journey from London to India to raise awareness of one of nature’s most undervalued resources, riding 30,000km (18,600-mile) through Europe and the Middle East.

Their journey begins every morning until 2pm. “At each stop place, after covering approximately 40 kilometers, we then talk to communities about Save Soil movement and ask for signatures for a pledge. This pledge is for information purposes as we will not be taking any financial donation nor solicit financial support during our journey. Our sole aim is to inform citizens about the degrading condition of our soil, and Save Soil activities and ask for support via signing of the petition which will eventually be submitted in Pretoria. We also intent to meet influential leaders including the kings, chiefs and government officials in each region.”

“At a global level, our aim is to inspire at least 3.5 billion people (60% of the world’s electorate) to support environmentally-conscious governance decisions. This will help drive national policy changes toward raising the organic content of soil up to at least 3- 6%. Organic content is what differentiates arable soil from desert sand,” he concludes.

Save Soil is a global movement launched by Sadhguru, to address the soil crisis by bringing together people from around the world to stand up for Soil Health, and supporting leaders of all nations to institute national policies and actions toward increasing the organic content in cultivable soil. It is on www.savesoil.org

About Conscious Planet – Save Soil Movement

The Conscious Planet Movement to Save Soil is a global civil movement to inspire a conscious approach to saving our soil and planet. This is, first and foremost, a people’s movement. It aims to activate the support of over 3.5 billion people (over 60 percent of the world’s voting population) to make ecological issues an election priority for governments across the globe. The Movement aims to urge and support governments in formulating policies that will address soil health in their country and make farming activity more soil friendly to halt and reverse further soil degradation globally. The primary recommendation of the Save Soil Movement is for governments across the world to legislate policies that will mandate a minimum of 3-6 percent organic content in all agricultural soil in their country. World leaders, influencers, artists, subject matter experts, farmers, spiritual leaders, and NGOs are among those who have pledged their support to rekindle humanity’s relationship with soil.