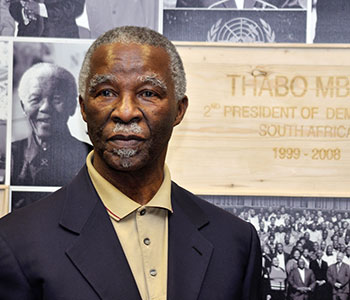 In this series, Verbatim, we feature a speech, titled “The African Renaissance”, delivered by former President of the Republic of South Africa, H.E. THABO MBEKI in 1996. At the time, he was a Deputy President to Africa’s global icon, H.E. Mr Nelson Mandela.

A struggle for political power is dragging the Kingdom of Lesotho towards the abyss of a violent conflict. The Democratic Republic of Congo is sliding back into a conflict of arms from which its people had hoped they had escaped forever.

The silence of peace has died on the borders of Eritrea and Ethiopia because, in a debate about an acre or two of land, guns have usurped the place of reason.

Those who had risked death in Guinea Bissau as they fought as comrades to evict the Portuguese colonialists, today stand behind opposing ramparts speaking to one another in the deadly language of bazooka and mortar shells and the fearsome rhythm of the beat of machine-gun fire.

A war seemingly without mercy rages in Algeria, made more horrifying by a savagery which seeks to anoint itself with the sanctity of a religious faith.

Thus can we say that the children of Africa, from north to south, from the east and the west and at the very centre of our continent, continue to be consumed by death dealt out by those who have proclaimed a sentence of death on dialogue and reason and on the children of Africa whose limbs are too weak to run away from the rage of adults.

Both of these, the harbingers of death and the victims of their wrath are as African as you and I.

For that reason, for the reason that we are the disembowelled African mothers and the decapitated African children of Rwanda, we have to say enough and no more.

It is because of these pitiful souls, who are the casualties of destructive force for whose birth they are not to blame, that Africa needs her renaissance. Were they alive and assured that the blight of human made death had passed for ever, we would have less need to call for that renaissance.

Africa has no need for the criminals who would acquire political power by slaughtering the innocents as do the butchers of the people of Richmond in KwaZulu-Natal.

Nor has she need for such as those who, because they did not accept that power is legitimate only because it serves the interests of the people, laid Somalia to waste and deprived its people of a country which gave its citizens a sense of being as well as the being to build themselves into a people.

Neither has Africa need for the petty gangsters who would be our governors by theft of elective positions, as a result of holding fraudulent elections, or by purchasing positions of authority through bribery and corruption.

The thieves and their accomplices, the givers of the bribes and the recipients are as African as you and I. We are the corrupter and the harlot who act together to demean our Continent and ourselves.

The time has come that we say enough and no more, and by acting to banish the shame, remake ourselves as the midwives of the African Renaissance.

An ill wind has blown me across the face of Africa. I have seen the poverty of Or- lando East and the wealth of Morningside in Johannesburg. In Lusaka, I have seen the poor of Kanyama township and the prosperous residents of Kabulonga.

Everyday, you ad I see those who would be citizens of Kabulonga and Borrowdale and Victoria Island and Morningside being born everywhere in our country. Their object in life is to acquire personal wealth by means both foul and fair.

Their measure of success is the amount of wealth they can accumulate and the os- tentation they can achieve, which will convince all that they are a success, because, in a visible way, they are people of means.

In this equation, the poverty of the masses of the people becomes a necessary condition for the enrichment of the few and the corruption of political power, the only possible condition for its exercise.

It is out of this pungent mixture of greed, dehumanising poverty, obscene wealth and endemic public and private corrupt practice, that many of Africa’s coups d’etat, civil wars and situations of instability are born and entrenched.

The time has come that we call a halt to the seemingly socially approved deification of the acquisition of material wealth and the abuse of state power to impoverish the people and deny our Continent the possibility to achieve sustainable economic development.

Africa cannot renew herself where its upper echelons are a mere parasite on the rest of society, enjoying as self-endowed mandate to use their political power and define the uses of such power such that its exercise ensures that our Continent reproduces itself as the periphery of the world economy, poor, underdeveloped and incapable of development.

The African Renaissance demands that we purge ourselves of the parasites and maintain a permanent vigilance against the danger of the entrenchment in African society of this rapacious stratum with its social morality according to which everything in society must be organised materi- ally to benefit the few.

As we recall with pride the African scholar and author of the Middle Ages, Sadi of Timbuktu, who had mastered such subjects as law, logic, dialectics, grammar and rhetoric, and other African intellectuals who taught at the University of Timbuktu, we must ask the question – where are Africa’s intellectuals today!

In our world in which the generation of new knowledge and its application to change the human condition is the engine which moves human society further away from barbarism, do we not have need to recall Africa’s hundreds of thousands of intellectuals back from their places of emi- gration in Western Europe and North America, to rejoin those who remain still within our shores!

I dream of the day when these, the African mathematicians and computer specialists in Washington and New York, the African physicists, engineers, doctors, business managers and economists, will return from London and Manchester and Paris and Brussels to add to the African pool of brain power, to enquire into and find solutions to Africa’s problems and challenges, to open the African door to the world of knowledge, to elevate Africa’s place within the universe of research the information of new knowledge, education and information.

Africa’s renewal demands that her intelligentsia must immerse itself in the titanic and all-round struggle to end poverty, ignorance, disease and backwardness, inspired by the fact that the Africans of Egypt were, in some instances, two thousand years ahead of the Europeans of Greece in the mastery of such subjects as geometry, trigonometry, algebra and chemistry.

To perpetuate their imperial domination over the peoples of Africa, the colonisers sought to enslave the African mind and to destroy the African soul.

They sought to oblige us to accept that as Africans we had contributed nothing to human; civilisation except as beasts of burden, in much the same way as those who are opposed to the emancipation of women seek to convince them that they have a place in human society; but only as beasts of burden and bearers of children.

In the end, they wanted us to despise ourselves, convinced that, if we were not sub-human, we were, at least, not equal to the colonial master and mistress and were incapable of original thought and the African creativity which has endowed the world with an extraordinary treasure of masterpieces in architecture and the fine arts.

The beginning of our rebirth as a Continent must be our own rediscovery of our soul, captured and made permanently available in the great works of creativity represented by the pyramids and sphinxes of Egypt, the stone buildings of Axum and the ruins of Carthage and Zimbabwe, the rock paintings of the San, the Benin bronzes and the African masks, the carvings of the Makonde and the stone sculptures of the Shona.

A people capable of such creativity could never have been less human than other human beings and being as human as any other, such a people can and must be its own liberator from the condition which seeks to describe our Continent and its people as the poverty stricken and disease ridden primitives in a world riding the crest of a wave of progress and human upliftment.

In that journey of self discovery and the restoration of our own self-esteem, without which we would never become combatants for the African Renaissance, we must retune our ears to the music of Zao and Franco of the Congos and the poetry of Mazisi Kunene of South Africa and refo- cus our eyes to behold the paintings of Malangatane of Mozambique and the sculptures of Dumile Feni of South Africa.

The call for Africa’s renewal, for an African Renaissance is a call to rebellion. We must rebel against the tyrants and the dictators, those who seek to corrupt our societies and steal the wealth that belongs to the people.

We must rebel against the ordinary criminals who murder, rape and rob, and conduct war against poverty, ignorance and the backwardness of the children of Africa.

Surely, there must be politicians and business people, youth and women activists, trade unionists, religious leaders, artists and professionals from the Cape to Cairo, from Madagascar to Cape Verde, who are sufficiently enraged by Africa’s condition in the world to want to join the mass crusade for Africa’s renewal.

It is to these that we say, without equivocation, that to be a true African is to be a rebel in the cause of the African Renaissance, whose success in the new century and millenium is one of the great historic challenges of our time.

Let the voice of the Senegalese, Sheik Anta Diop, be heard: “The African who has understood us is the one who, after reading of our works, would have felt a birth in himself, of another person, impelled by an historical conscience, a true creator, a Promethean carrier of a new civilisation and perfectly aware of what the whole earth owes to his ancestral genius in all the domains of science, culture and religion.

“Today each group of people, armed with its rediscovered or reinforced cultural identity, has arrived at the threshold of the post industrial era. An atavistic, but vigilant, African optimism inclines us to

of sinking down to barbarism.”

Though the speech was first published on www.dirco.gov.za, it was later included in a collection of H.E. Mr Thabo Mbeki’s speech was published in a book titled “Africa: The Time has Come” published by Tafelberg and Mafube Publishers.