The City of Timbuktu in the 14th Century 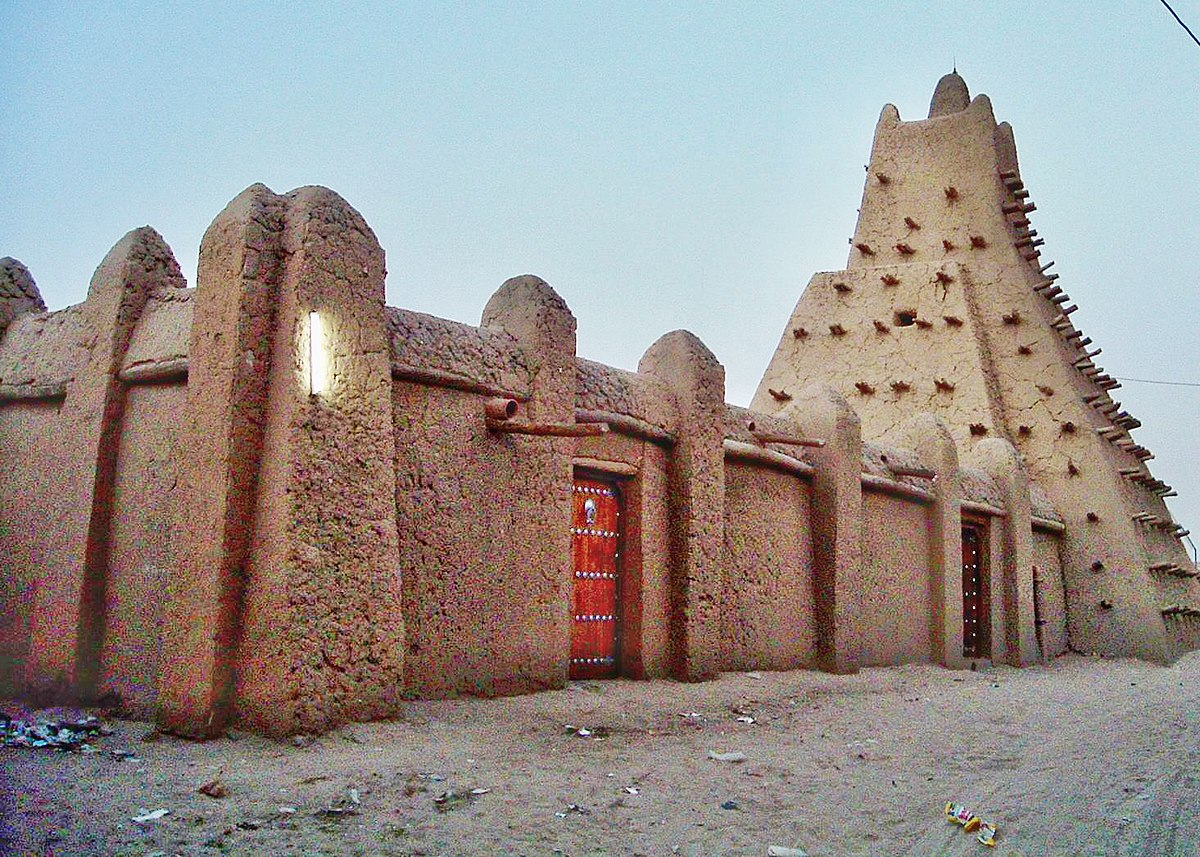 As part of South Africa’s contribution to former President Thabo Mbeki’s effort to advance the African Renaissance, the country contributed to the preservation of the Timbuktu manuscripts through digitisation. Jambo Africa Online’s Editor, ANDILE MSINDWANA, gives us a glimpse into the history of this iconic city.

Timbuktu or Tombouctou (in French), is a city in Mali. It was often used as a popular term, by the Europeans, to describe a distant and mystical place.

The people of Timbuktu were of a peaceful nature. They had a custom of almost continuously walking about the city in the evenings (except for those that sell gold), between 10pm and 01am, playing musical instruments and dancing.

Timbuktu was widely known as a city of fortune. The growth of the Mali Empire led to an extension of the region into the Savannah and forest. Western routes were developed and with that, cities such as Ouadane, Oualata, Chinguetti, Begho, and Bono Manso emerged along important trading routes.

Reality is that the city of Timbuktu was an area of vibrant trade. In the 12th century, goods such as salt, gold, and ivory were among the prime commodities traded. Slaves were also sourced from this city.

Timbuktu Manuscripts, or Mali Manuscripts, some of which date back to the 13th century, are Arabic and African texts that discuss the city’s glorious past; when Muslim merchants would trade gold from West Africa to Europe and the Middle East in return for salt and other goods. The manuscripts point to the fact that Africa has a rich legacy of written history, contrary to the popular notion that oral traditions alone preserved the continent’s heritage.

Why did Timbuktu become the Centre of Trade?

Traders moved their goods across the Sahara in large groups called caravans. Camels were the main mode of transportation and were used to carry goods and people.

The camel was the most important part of the caravan. Without the camel, trade across the Sahara would have been impossible. Camels are uniquely adapted to survive long periods without water. They can also survive large changes in body temperature allowing them to withstand the heat of the day and the cold of night in the desert.

Travel by camel caravan was slow, strenuous and dangerous. Hazards such as excessive heat, stifling sandstorms, death by starvation, thirst and attacks by raiders added to the possibility of getting lost. Caravans included on average a thousand camels, sometimes reaching as many as 12 000 animals. Runners were sent ahead to oases to ship out water when the caravan was still days away.

Large caravan processions were safer because they offered protection from bandits. Today most cross-desert transport is through an extensive tarmac road network in addition to transport by air and sea. Tuareg camel caravans still travel on the traditional Saharan routes, carrying salt from the desert interior to communities on the desert edges. Sometimes slaves carried goods as well.

What Kind OF Goods were Exchanged?

In the ancient empire of Mali, the most important industry was the gold industry, while the other trade was the trade in salt.

Much gold was traded through the Sahara Desert to the countries on the North African coast. The gold mines of West Africa provided great wealth to West African Empires such as Ghana and Mali. Gold was bountiful in West Africa, and was used as a form of currency. It was also used by the wealthy as decoration, worn on articles of clothing, and it was prized by many people. Worldwide, African gold was famous and many countries wanted it, and would trade for it. The trade in gold helped Mali stay very wealthy.

The main item they would import was salt which they would use it for many things. Since salt was abundant in the North of Mali, but scarce in the South, they would have to import it. Salt was mainly used to preserve foods, like meat, but also corpses, etc. Malians would also need salt in their food, since they wouldn’t normally have much in their diet. Goods also included salt, ivory, kola nuts, cloth, ostrich feathers, metal goods and beads. They would also import things like glass, ceramics, and precious stones from North Africa.

The last caravan routes were closed down in 1933. Leo travelled along these caravan routes, into the Saharan desert and twice to Timbuktu; once as a young man, accompanying his uncle to visit the sultan of the Sudan; and once a few years later, on a longer trip through what was then known as “Black Africa”.

King Mansa Musa in the 14th century made an important mark in Mali by introducing the kingdom to Islam and making it one of the first Muslim states in northern Africa. He incorporated the laws of the Quran into his country’s justice system.

Cities such as Timbuktu and Gao were developed into international centres of Islamic learning and culture. Elaborate mosques and libraries were built.

The cities became meeting places for poets, scholars, and artists. Musa became one of the most powerful and wealthiest leaders of his time. Mali became renowned in the imaginations of European and Islamic countries in the 14th century.

Musa is most noted for his pilgrimage to Mecca, a visit which put Mali on the map. In 1339, Mali appeared on a “Map of the World” after his pilgrimage. In 1367, another map of the world showed a road leading from North Africa through the Atlas Mountains into Western Sudan. In 1375 a third map of the world showed a richly attired monarch holding a large gold nugget in the area south of the Sahara. Also, trade between Egypt and Mali now flourished.

On his return from Mecca, Musa brought back with him an Arabic library, religious scholars, and architects; who helped him build royal palace universities, libraries and mosques all over his kingdom. He strengthened Islam and promoted education, trade and commerce in Mali. He laid the foundations for Walata, Jenne and Timbuktu to become the cultural and commercial centre of North Africa.

Mansa Kankan Musa ruled with all the ideals of a fine Muslim king. He died in the mid-14th century, and Mali was never quite the same. Internal squabbling between ruling families weakened Mali’s governance and its network of states started to unravel. Then, in 1430, a group of Berbers seized much of Mali’s territory, including Timbuktu.

The Great Mosque of Djenné is the largest mud brick building in the world and is considered by many architects to be the greatest achievement of the Sudano- Sahelian architectural style, albeit with definite Islamic influences. Originally built in the 13th or 14thcentury, reconstruction of the current Great Mosque began in 1906 and was probably completed between 1907 and 1909. The mosque’s construction was supervised and guided by the head of Djenné’s mason guild, Ismaila Traoré. At the time, Djenné was part of the colony of French West Africa and the French may have offered political and economic support for the construction of both the mosque and a nearby madrasa. The structure of the small town of Djenné is demarcated by rivers with approximately a population of 23,000, and it’s close to 2,000 houses mostly retaining Malian traditional styles.

The Golden Age of Islam is traditionally dated from the mid-07th century to the mid-13th century. The specialization of Timbuktu was in knowledge and book trade. During these period, Muslim rulers established one of the largest empires in history.

In Timbuktu, there were numerous judges, scholars and priests, all well paid by the king, who greatly honoured learned men. Hundreds and thousands of manuscripts were written over the course of the centuries. Written in ornate calligraphy, the manuscripts represent a compendium of learning on everything from law, sciences and medicine to history and politics. These manuscript books were sold and it is reported that Timbuktu made more profit from the trade in books than from any other line of business.

During this period, artists, engineers, scholars, poets, philosophers, geographers and traders in the Islamic world contributed to agriculture, the arts, economics, industry, law, literature, navigation, philosophy, the sciences and technology, both by preserving earlier traditions and by adding inventions and innovations of their own. Also at that time the Muslim world became a major intellectual centre for science, philosophy, medicine and education.

Under the reign of Askia Muhammed (1493-1591), Timbuktu became an important centre for Islamic learning, engineering, medicine and architectures. With the campuses of Sankore Madressah (comparable to an Islamic University) attended by some 25 000 students, Timbuktu became an intellectual and religious centre and served as a distribution platform for scholars and books. Books were not only written in Timbuktu, but they were also imported and copied there. There was indeed a local book-copying industry in the town.

Timbuktu was a centre of learning in Mathematics, chemistry, physics, optics, astronomy, medicine, history, geography, the traditions of Islam, government laws and much more. 20 000 ancient manuscripts were located at the Ahmed Baba Institute. The manuscripts provide a written testimony to the skill of African scientists, in astronomy, mathematics, chemistry, medicine and climatology in the Middle Ages.

Although mosques like Sankoré were centres of learning, much of the day-to-day teaching activity occurred more informally in the homes of scholars. The core of the Islamic teaching tradition is the transmission of texts, which is handed down through a chain of transmitters from the teacher to the student, preferably through the shortest and most prestigious set of intermediaries. The student would listen to the teacher’s dictation, write their own copy and read it back, or listen to another student read it. The scholars had their own private libraries to help them teach.

In 1591, the Moroccan War devastated Timbuktu and Gao, the significant trading centres. The outcome of the war reduced trade significantly. The trans-Saharan trade routes still continued after the war. After the French invasion railroads were constructed and West African trade routes became dominant. From the mid-20th century various nations were granted independence.

The city and its desert environs are an archive of handwritten texts in Arabic and in African languages in the Arabic script, produced between the 13th and the 20th  centuries. The manuscript libraries of Timbuktu are significant repositories of scholarly production in West Africa and the Sahara. Given the large number of manuscript collections it is surprising that Timbuktu as an archive remains largely unknown and under-used.

Why Timbuktu is a World Heritage site?

Recognising its significance as a site of African architecture and of its scholarly past, UNESCO declared Timbuktu a World Heritage Site in 1990. Timbuktu was a thriving centre of scholarship instrumental to the spread of Islam in Africa. It retains three notable mosques and one of the world’s great collections of ancient manuscripts. This West African city, long synonymous with the uttermost end of the Earth, was added to the World Heritage List in 1988, many centuries after its apex. Timbuktu can be seen as an intellectual and spiritual capital and a centre for the propagation of Islam throughout Africa in the 15th and 16th centuries. The criteria for declaring Timbuktu as a heritage site have been described as; a) interchange of values, (b) icon of an era and (c) interaction with the environment.