Yinka Shonibare CBE RA: An exploration of cross-cultural heritage focusing on the histories of Nigeria and United Kingdom through the lens of globalisation 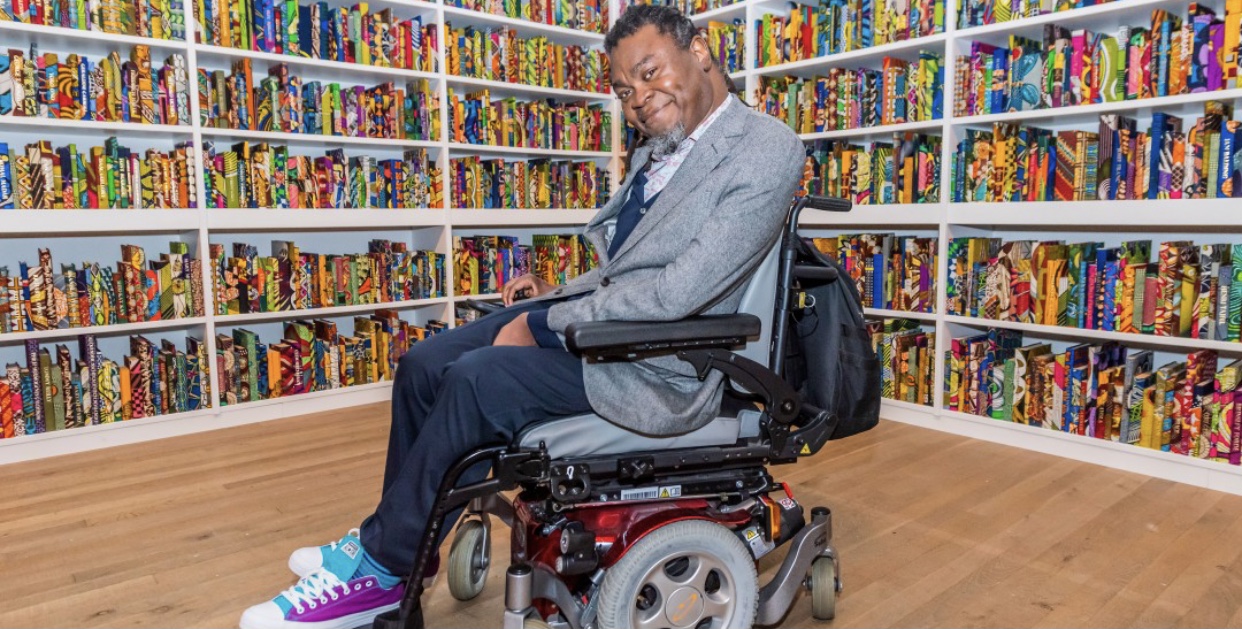 Parminder Vir OBE profiles Yinka Shonibare, a multi-disciplinary Nigerian-British artist who through his work demonstrates the historically intertwined relationship between Africa and Europe by commenting on their histories and exploring colonialism and post-colonialism through the lens of globalization.

Yinka Shonibare is an artist I have admired from afar! In 2010, I was serving as Non-Executive Director at the Department for Media, Culture and Sports (DCMS) and spent many days in their offices near Trafalgar Square for board meetings. Emerging from the Charing Cross tube station, my eyes would gaze up to the oversized model of Nelson’s Ship in a Bottle, placed atop the Fourth Plinth by the British-Nigerian artist Yinka Shonibare. Entering Trafalgar Square, it was impossible to miss this curious installation of a ship in a bottle and I would find myself gazing and wondering how he got the ship into the bottle!

In 2014, I moved to Lagos, Nigeria to work with the Tony Elumelu Foundation and one evening at a reception, I found myself standing next to a tall, elegantly dressed young man who introduced himself as Wale Shonibare. “Do you know Yinka Shonibare?”, I asked. “Yes, he is my brother, why, do you know him?” “No, but I do know of his work”, and I spent the rest of the evening sharing my admiration for this great artist. The two brothers could not be more different – Wale is a banker, currently working with the African Development Bank and Yinka a much-admired and respected artist.

One day soon, I hope to meet Yinka in person, to thank him for his enduring work, a testament to British multiculturalism and his beloved Nigeria. Meanwhile, I hope you will enjoy reading this article and go in search of this playful, witty and inquisitive artist who supports so many emerging artists.

Yinka Shonibare CBE RA is a multi-disciplinary Nigerian-British artist, most widely known for using painting, sculpture, photography and film to explore ideas of cross-cultural heritage, and for his signature use of colourful Ankara fabric. Through his work, Shonibare demonstrates the historically intertwined relationship between Africa and Europe, commenting on their histories and exploring colonialism and post-colonialism through the lens of globalization. He also uses his work to question the validity of contemporary cultural and national identities, examining ideas of cross-cultural heritage and the creation of a hybrid identity. He has described his work as a means to “[raise] questions rather than [answer] them”.

“In a lot of my work it’s important that there is this ambiguity, that it doesn’t answer these questions and that there is no definite statements being made. So it’s more a type of poetry; it’s a poetic statement.”

Shonibare was born in London and moved to Lagos, Nigeria when he was 3. He returned to study Fine Art at Central Saint Martins College, and got a Masters in Fine Art from Goldsmith College, part of the “Young British Artists” generation, noted for their “entrepreneurial spirit, alongside their use of shock tactics, throwaway materials and dark humour”.

His most recognised work is a commissioned piece, “Gallantry and Criminal Conversation” for Documenta 11, that put him in the spotlight.

Some of his most popular works include “Mr and Mrs Andrews Without Their Heads”, “Nelson’s Ship in a Bottle” (which was displayed on the Fourth Plinth at Trafalgar Square from 2010 – 2012, a first for a Black British artist), Scramble for Africa, and “The Swing”.

Yinka Shonibare uses a wheelchair, after a spine infection when he was a teenager left half of his body paralysed, and works as a conceptual artist with a team of assistants.

Yinka Shonibare was elected a Royal Academician by the Royal Academy, London in 2013, awarded a Commander of the Order of the British Empire (CBE) in 2019, and was the 8th recipient of the prestigious Whitechapel Gallery Art Icon Award in 2021.

Shonibare’s latest project is “Guest Artists Space”, a residency programme for artists in Nigeria, initiated to develop a sustainable institution to train curators, art historian and conservators in Nigeria. Work is underway to prepare two locations: a studio in Lagos, Nigeria and a 54-acre sustainable farm in Ijebu, Nigeria. The spaces will be used for live/work residencies for Nigerian artists, providing opportunities for them to network locally and internationally with organisations, education providers, fellow practitioners, curators and researchers. It will also host cultural exchanges where international participants can live and work, alongside their African peers for up to three months.

The Guest Artists Space (G.A.S.) Foundation exists to encourage critical and engaging practices in the fields of contemporary art, design, architecture, agriculture and ecology with the space to research, experiment, share, educate and develop work. I invite you to support G.A.S Foundation to enable peer to peer cultural exchanges between Africa and international participants.