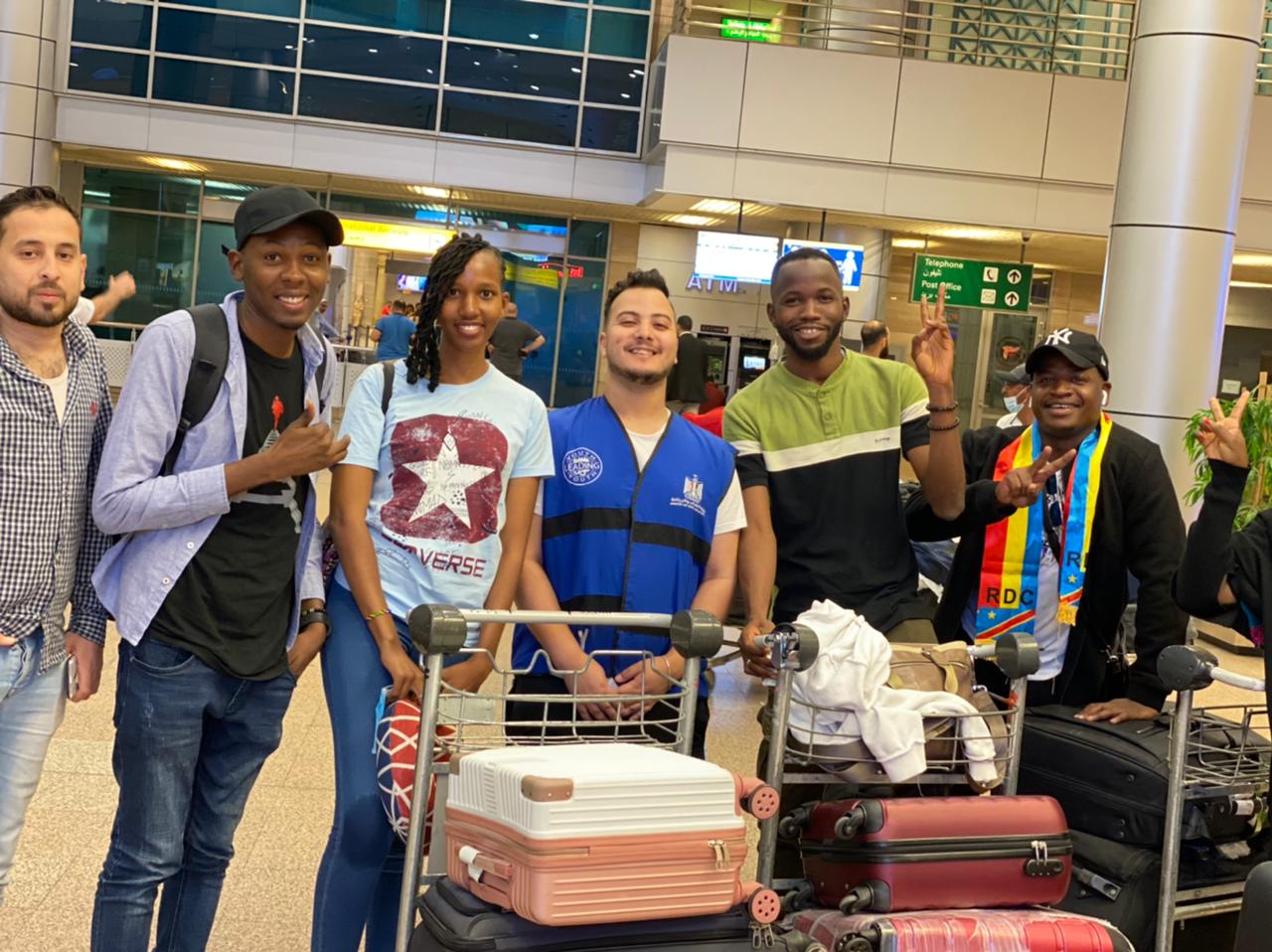 The Egypt-based Nasser Fellowship for International Leadership” has recently announced the arrival of the participants of the third batch of the Fellowship.

The country’s Ministry of Youth and Sports launched the first activities of the late leader Gamal Abdel Nasser’s Fellowship for International Leadership – the third edition organised under the auspices of H.E. Abdel Fattah El-Sisi, President of the Republic. The event has attracted over 150 young leaders from non-aligned countries and friendly countries and is scheduled to be held during the period from 31 May 31 to 17 June 2022 in Cairo under the slogan: “Non-Aligned Youth and South-South Cooperation.”

The beginning of the events of the first day of the Nasser Fellowship for International Leadership included organizing workshops with the participation of Muhammad Al-Feel and Ahmed Mukhtar, graduates of the second batch of the Nasser Fellowship for International Leadership. The workshops opened with youth from various countries introducing themselves to each other as ice breaking, as well as indulging in confidence and team building activities. A cultural exhibition will also be held to present the different cultures of different countries as part of the programme of the Fellowship which is held in the Engineering Authority House in Cairo.

For his part, Hassan Ghazali, General Coordinator of the Nasser Fellowship for International Leadership, pointed out that the Nasser Fellowship for International Leadership comes with the participation of youth leaders representing about 73 countries around the world, in addition to the Egyptian delegation, representing many societal segments targeted by the Fellowship this year, including the national branches of the Youth Network of the Non-Aligned Movement, the heads of the National Youth Councils, members of local councils, researchers in strategic research and intellectual centres, as well as members of professional syndicates, media professionals, journalists and social entrepreneurs. The fellowship is held under the auspices of His Excellency President Abdel Fattah El-Sisi for the second time in a row.

Ghazali added that the Nasser Fellwship for International Leadership is one of the mechanisms for implementing Egypt Vision 2030; The Ten Principles of the African and Asian Peoples Solidarity Organization; Africa Union’s Agenda 2063; the UN’s Sustainable Development Goals 2030; South-South Cooperation; African Union Road Map on Investing in Youth: African Youth Charter; and the Principles of the Non-Aligned Movement.

The Fellowship gives an equal opportunity for both genders, as indicated by the fifth goal of the SDG 2030, as well as empowering young people and giving the opportunity for repesentatives from different countries of the world to forge partnerships in various fields and not only on the continent but even globally, as indicated by the seventeenth goal of the sustainable development goals.

At the opening session of the eighth session of the Fellowship, the Ministry of Youth and Sports organized a dialogue session on the role of the Information and Decision Support Center (IDSC), with the participation of Major General Hamdi Helmy, Head of the Central Department for Strategic Planning and Projects at the IDSC; Major General Mohamed Abdel Maksoud, Head of the Crisis and Disaster Management Sector and Risk Reduction; Dr Reham Sadiq, Director of the General Department of Strategic Planning; Engineer Walid Jado, Head of the Community Communication Hub; and Hassan Ghazali, General Coordinator of Nasser Fellowship for International Leadership.

Dr Sadiq gave a brief outline of the emergence of the IDSC in 1985 and the many transformations that the centre witnessed to keep pace with the changes that the Egyptian society went through as during its first phase of existence from 1985 to 1999, it developed the information communications infrastructure in Egypt. Then the establishment of the Ministry of Communications and Information Technology in 1999 was a major turning point in its path, to play its role as a “think tank” that enabled and enhanced the efforts of the decision-making in various fields. It helped to forge societal dialogue through building communication channels among the Egyptian citizenry as this is considered the ultimate goal of development. Dr Sadiq further added that some of the work streams of the IDSC include openness and establishing presence at the local and international levels; developing support for public policy makers; the development of mechanisms and tools for community communication; support for digital transformation efforts; developing capacity for the state’s readiness in the face of crises and disasters; institutional development for institutions; and the numerous awards received by the centre.

For his part, Major General Hamdi Helmy, Head of the Central Department for Strategic Planning and Projects at the IDSC, reviewed the challenges confronting think tanks, including limited funding, the challenge of developing the relationship with decision makers, the rapid technological development, and the resulting dumping of information and huge data. He also addressed the vision of the IDSC represented in being the first locally and internationally distinguished think tank, the most influential on decision-making circles in order to achieve Egypt’s vision for the future, and the strategic direction pursuit by the Information and Decision Support Centre in support public policy-making through an in-depth study of multi-dimensional issues and to present alternatives and innovative ideas to confront challenges and develop development efforts with the participation of the concerned parties, strategic goals, expand the institutional excellence of the centre, and developing the knowledge society by enhancing public policy-making and supporting the state’s readiness to manage crises and disasters risks.

During his speech at the opening of the activities of the eighth day of the Nasser Fellowship for International Leadership in its third edition, Major General Mohamed Abdel Maqsoud, Head of the Crisis and Disaster Management and Risk Reduction Sector addressed the strategy of the IDSC in Crisis and Disaster Management, explaining that the whole world is going through With multiple crises and risks, therefore, it is important for us to be prepared and ready to deal with any of the risks or crises. Abdul Maqsoud added that good handling of crises and disasters ensures the preservation of the state’s survival as well as protecting the security of the homeland and citizens, and achieving the economic well-being of the people. The Egyptian state manages some of the crises and disasters that have occurred, and works within the framework of strategic planning in the pre-crisis stages in which a national plan is planned for how to deal with crises. Efficiently and effectively, which made the repercussions of the crisis on us less harmful than its repercussions on many countries of the world.

For his part, Dr. Eng. Walid Jado, Head of the Community Communication Hub at the IDSC, tackled during the opening session of the activities of the eighth day of the Nasser Fellowship for International Leadership in its third edition, about the role of the Community Communication Hub at the IDSC within the framework of the process of linking the center with the listeners through modern means and tools that ensure the occurrence of such community communication and achieve the desired goal within the framework and objectives of the Information and Decision Support Center, in addition to the Center’s work in the field of enhancing communication by developing relations with the community of researchers and partners, where we cannot do anything without communication and reaching To new mechanisms for communication, as well as developing an awareness-raising role and participating in events with international partners.

It is worth noting that a workshop will be organized for participants on “The Role of Women” within the framework of the “Global Citizen Talk” workshops that are organized with the participation of Coach Ahmed Negm, one of the participants in the third batch of Nasser Scholarship for International Leadership.