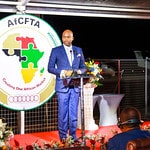 The initiative seeks to test the operational, institutional, legal, and trade policy enviornment under the AfCFTA, and to send an important positive message to African economic managers.

It is also expected to serve as a gateway to encourage continued trade under the AfCFTA, resulting in a multiplier effect and increased opportunities for SMEs, youth and women in trade and ultimately establishing sustainable and inclusive economic development.

These products originating from Africa will enjoy duty-free and quota-free trading among the partnering countries.

According to the AfCFTA Secretariat, participation in the guided trade initiative depends on whether countries have submitted their tariff schedules in accordance with the agreed modalities to trade preferentially amongst themselves.

Launching the guided trade initiative in Accra, Secretary-General of the AfCFTA Wamkele Mene, said “this is the moment the founding mothers and fathers of the Organisation of African Unity have longed for. “

“We have finally honored and made reality the vision of those who liberated our continent.”

“We are connecting East Africa to West Africa, North Africa to Southern Africa. Trade will be the driver of inclusivity, creating opportunities for young Africans.

“So we have taken the first journey today, and i hope in 15 years, will have succeeded in lifting millions and millions of Africans out of poverty.”

Products double or triple by next year

Mr Mene, said the launch was marked with a total of 96 products traded by eight countries and the number is expected to “double” or “triple” by next year.

“I am extremely proud that we are able to demonstrate to ourselves as Africans that we have the capacity and inclination to achieve this,” he said.

Mr Mene announced that more and more state parties are expressing interest as they conclude the process of domesticating the AfCFTA in their law.

East African member states have dominated the list of countries that have domesticated AfCFTA adequately to facilitate commencement of trade under the trading bloc’s framework.

Three out of the eight countries that have set the stage for trading under AfCFTA are from East Africa.