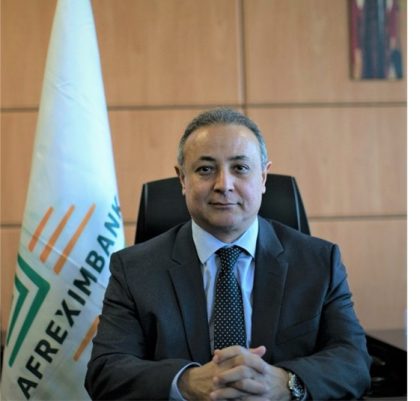 African Export-Import Bank (Afreximbank) is delighted to announce the appointment of its Executive Vice President, Mr. Amr Kamel, as Chairman of the Board of Directors of the Arab International Bank.

Mr. Kamel’s recent appointment as Chairman builds on a rich and distinguished career in banking, stretching back to 1985. Prior to his tenure as Executive Vice President for Business Development and Corporate Banking at Afreximbank, which began in 2016 after serving in a series of significant senior roles since joining in the early years of the Bank’s establishment, Kamel held roles in various international financial institutions including Chemical bank (now JP Morgan Chase) and Bank of America.

Since joining Afreximbank in 1995, Amr played a vital role in the Bank’s expansion across Africa, as well as its rising profile beyond Africa, on the international stage. In financial terms, Mr. Kamel’s contribution in growing the Bank’s portfolio from US$55 million to nearly US$19 billion is considerable. Kamel has also played a pivotal role in leading the Bank’s activities in Egypt and in, overseeing Afreximbank’s financing of loans and guarantees to Egypt which amounted in total to over US$26 billion.

Mr. Kamel, a pioneer staff of Afreximbank, is assuming this new role of Chairman of the Board of Directors of the Arab International Bank after taking an early retirement from the Bank after 27 years of outstanding service.

Professor Benedict Oramah, President and Chairman of the Board of Directors of Afreximbank, said:

“On behalf of the Board of Directors, Executive Management and staff, I congratulate Amr on his appointment as chairman of the Arab International Bank. We thank him for his dedication, vision and insight directed towards the advancement of African trade and increased prosperity across the continent. His expertise will be vital in leading the strategy of Arab International Bank in the coming years. We are confident that his influence and knowledge of the banking industry in Africa will be useful in advancing the goals of the Arab International Bank in financing Egypt-Africa trade. I look forward to our working together in his new capacity, with the aim of combining our efforts in the cause of transforming Africa.’’

Mr. Kamel holds an MBA from New York University in the United States of America, and a BA in Economics from the American University in Cairo.