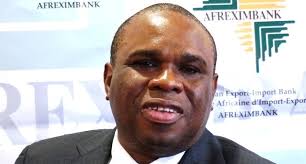 African Export-Import Bank (Afreximbank) is delighted to congratulate Professor Benedict Oramah, President, and Chairman of the Board of Directors of Afreximbank, on his conferment to the title of “Commander of the Order of the Niger” (CON), by the President of the Federal Republic of Nigeria, His Excellency Muhammadu Buhari. Prof Oramah’s investiture occurred on the 11th of October, 2022 in a colourful ceremony in Abuja.

The Commander of the Order of the Niger is Nigeria’s second most prestigious order of merit and is awarded to individuals who have rendered outstanding services to the nation. In the citation associated with President Oramah’s receipt of the honour, the Professor’s “vast achievements as a visionary institutional leader” were recognized, as well as his status as a “truly great son of Nigeria and Africa”.

Also invoked in the citation was the President’s leadership of Afreximbank, and his role, in this position, as a prominent ambassador of Africa’s creativity and enterprise. The citation notes that the President’s tenure has witnessed the Bank emerge as the principal driver of economic transformation in Africa, and an instrumental player in the implementation of the historic African Continental Free Trade Agreement (AfCFTA). Moreover, Professor Oramah’s leadership has guided Afreximbank’s design and launch of vital and ambitious pan-African ventures, such as the “revolutionary” Pan-African Payment and Settlement System (PAPSS), which facilitates significant intra-African payments in African currencies, as well as the biennial Intra-African Trade Fair, at which an aggregate of over US$75 billion in trade and investments deals have been secured.

In addition to these momentous contributions to pan-African economic collaboration and interaction, President Oramah’s award is an acknowledgement of his critical role in strengthening the Nigerian financial sector and the growth of its private sector – with a total of US$36 billion invested by the Bank into the Nigerian economy since the institution’s founding.

Prof Benedict Okechukwu Oramah, President of Afreximbank, commenting on his receipt of the honour, said:

“As a proud son of Nigeria, it is an incalculable honour to receive the Commander of the Order of the Niger. I am grateful to His Excellency President Muhammadu Buhari for the recognition not only of my own lifetime’s work, but of the stellar work done by everyone at Afreximbank to stimulate Nigeria’s economic growth and the wider economic transformation of Africa. I remain utterly committed to fulfilling Afreximbank’s vision of a continent which is economically developed, sophisticated and able to assert its independence and draw on the incredible potential of its people.”

African Export-Import Bank (Afreximbank) is a Pan-African multilateral financial institution mandated to finance and promote intra-and extra-African trade. Afreximbank deploys innovative structures to deliver financing solutions that support the transformation of the structure of Africa’s trade, accelerating industrialization and intra-regional trade, thereby boosting economic expansion in Africa. The Bank has a rich history of intervening in support of African countries in times of crisis. Through the Pandemic Trade Impact Mitigation Facility (PATIMFA) launched in April 2020, Afreximbank has disbursed more than US$6.5 billion in 2020 to help member countries manage the adverse impact of financial, economic, and health shocks caused by the COVID-19 pandemic. A stalwart supporter of the African Continental Free Trade Agreement (AfCFTA), Afreximbank has completed the development of a Pan-African Payment and Settlement System (PAPSS) that was adopted by the African Union (AU) as the payment and settlement platform to underpin the implementation of the AfCFTA. Afreximbank is working with the AU and the AfCFTA Secretariat to develop an Adjustment Facility to support countries in effectively participating in the AfCFTA. At the end of 2020, the Bank’s total assets and guarantees stood at US$21.5 billion, and its shareholder funds amounted to US$3.4 billion. Afreximbank disbursed more than US$42 billion between 2016 and 2020. The Bank has ratings assigned by GCR (international scale) (A-), Moody’s (Baa1) and Fitch (BBB). The Bank is headquartered in Cairo, Egypt.