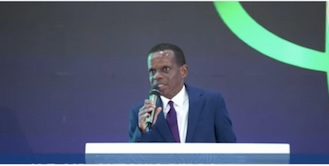 In his remarks, Prime Minister of the Federal Democratic Republic of Ethiopia, Abiy Ahmed, described the science museum as a ‘demonstration of Ethiopia’s attention to science and technology’. He cited Ethiopia’s Digital Economy Strategy, which started implementation two years ago, as a testimony to Ethiopia’s commitment to the sector. He commended the Artificial Intelligence Institute as one of the governmental institutions undertaking initiatives to support the country’s digital transformation endeavor and praised its promising potential to provide problem-solving research. Mr. Ahmed also expressed hope that the museum will encourage young people to think creatively and utilize the space as a ‘breeding ground for innovative ideas’.

Mr. Antonio Pedro, Acting Executive Secretary for the Economic Commission for Africa (ECA), reassured ECA’s continued support to harness ethical AIand innovation for Africa’s development. During the session, the need to continuously explore the contribution of artificial intelligence to Africa and the ‘kind of ethics we should follow’ when using the technology was raised.  Mr. Pedro highlighted the different digital technology transformation projects supported by the ECA towards harnessing the full potential of emerging technologies and sustaining economic development in the continent. Machine learning, big data and infrastructure development were cited as major opportunities for the ICT sector to flourish.

The newly inaugurated Science Museum is expected to further curate Ethiopia’s rich indigenous knowledge, science, and art alongside modern technological advancements. UNECA is committed to supporting the Science Museum through bilateral cooperation in artificial intelligence research, products development and services delivery that will enhance and impact the health, education, agriculture, transport sectors as well as public protection and safety with AI products and services.

The inauguration ceremony also featured an exhibition of private technology startups and institutions showcasing some of the country’s home-grown solutions in healthcare, finance, cybersecurity, and service industries. The exhibition will be on display and open to the public for the next several weeks.`