Saul Molobi: Building the economy through the beautiful game of golf 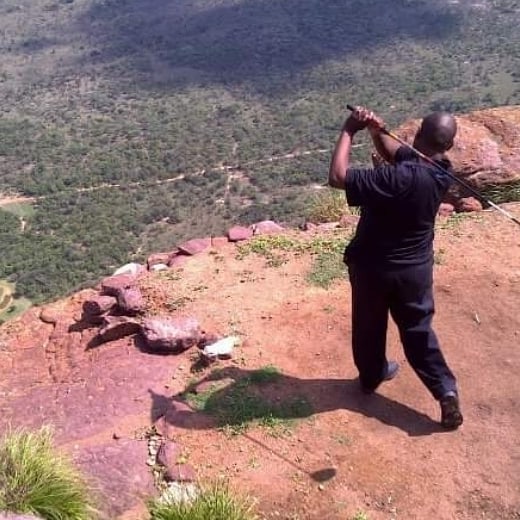 In its growing sophistication, the art and science of destination marketing has developed a new stream of golf tourism as an economic development platform as this sporting code goes beyond sport but it’s a business networking outlet in which major deals are negotiated. The concept of golf tourism is used to describe the visit by both players (professional and leisure players), who are mostly captains of the industry in their own right, and spectators (often corporates entertaining their clients as part of their stakeholder management) to cities and countries where while the purpose will be for a golf match, the benefits are primarily economic not only for the host but for the arrivals too. The event will contribute to the economic development of the hosting place as its hospitality sector will benefit from the uptake of their services (and research has indicated these arrivals will often repeat their visit to the place); arrivals may identify trade and investment opportunities in the area; and may also be a platform for the establishment of potential long term relationships between the visitors and the locals; the hosts and their clients; and the deepening of relations between the partners.

The golf industry goes beyond just playing as merchandising of golf-related products to consumers and non-tangible services such as television rights mean it is quite a significant contributor to economic development. According to the NGF’s “2019 Golf Industry Report”, the market for golf clubs and balls alone was $2.7 billion in 2018, up about 6% from the previous year. These exclude revenue generated from other merchandising opportunities.

Scholars such as Luis Miguel López-Bonilla, María del Carmen Reyes-Rodríguez and Jesús Manuel López-Bonilla from the Department of Business Administration and Marketing at Spain’s Universidad de Sevilla have asserted that “golf is a sports activity that is acquiring a higher boom and diffusion in recent years, due to the boost it has received due to its inclusion in the Rio de Janeiro Olympic Games in 2016 as well as at the Tokyo Olympics in 2021. Golf is currently considered as the primary sport in the world in terms of financial expenses. Golf and tourism are closely related, so their combination constitutes one of the most critical sectors for the tourism industry.”

The beautiful game of golf may also be pursued as a secondary activity – that is, a golfer on a holiday may fail to resist the temptation to play a round during their family vacation. “Golf is both a sport and a leisure activity, encompassing aspects related to tourism, hospitality and real estate,” say the scholars matter-of-factly. They then categorise golf tourists as active and passive golf tourists, “depending on whether they practice golf or are dedicated to watching it”. The spending power of golf tourists has developed the sport as “one of the essential segments of the tourism market.”

While we have previously covered the golf events undertaken by Brandhill Africa Foundation, this week we focus on two other trailblazers who are also ardent advocates for the beautiful game in Africa. These are Thabiso Magodielo of South Africa and Danilo Nhantumbo from Mozambique. Both are also seasoned brand architects with Thabiso being the Marketing and Communications Director of Fusion Tours and Hospitality; and Danilo is the founder of Presidential Golf Day LLC, a company making inroads into the world of golf even abroad.

He argues that golf is one of the best tools to brand position places as destinations for tourism and investment while also promoting products made in that place. “The professional implementation of the territorial brand is an effective instrument of local development, which promotes export activity, brings more tourists, results in a competent workforce and attracts investments. The reputation and image of a place is the most valuable asset and a future source of wealth for residents. It increases the self-esteem of the residents, mobilizes civic pride, makes people aware and proud of the achievements of their land.”

Danilo and his company have been the pioneers and creators of the golf market in Mozambique since 1975. “One thing golf teaches is humility. To find a man’s true character, play golf with him. Golf is a game of integrity and the most important thing is to do what is right when no one is looking.”

The highlight of Danilo’s business was last year when he hosted the Presidential Golf Day Dubai 2021 which was endorsed by the Emirates Golf Federation. The event that was inaugurated in the UAE for the first time and was by a plethora of VIPs, key decision makers plus local and international dignitaries. “The whole idea of hosting the event in the UAE was to create opportunities for entrepreneurs and investors to cross paths in order to establish business connections,” says Danilo.

The UAE event was built on the successes of four previous successful installments in Mozambique and Angola which were endorsed by the country’s first citizens, Ptesidents Filipe Nyusi and João Lourenço, respectively. The event has also been hosted in South Africa – Africa’s third biggest and most sophisticated  economy.

In an interview with Worldwide Golf, Danilo was quoted as saying: “The Presidential Golf Day is an international platform which aims to promote sustainable and impact tourism, investment and trade between African countries and the rest of the world. As a dynamic and diverse continent, the initiative was initially founded on creating an investment forum that was focussed on promoting regional and continental integration. Having completed three events in the continent, what better time for us, in our own way to, take Africa to the world.”

It was an exceptional achievement for an African event host to pull it off in Dubai and this is worth celebrating. “The story of Dubai is a remarkable one,” said Danilo to the Worldwide Golf. “Africa is also a remarkable continent so we required somewhere that fit the bill of being out of this world and Dubai ticks that box. Aside from its reputation as a ‘business, sporting and lifestyle hub that links the world’, Dubai is the host to a number of elite golf tournaments so it made perfect sense to host the 4th Annual Presidential Golf Day 2021 there.”

In the interview, Danilo drew the dialectical interdependence between the beautiful game and business. “Golf is a mental game. Trading and developing world class economies are a long mental exercise which forces you to think and act. We… bring people together to think and act for the greater good of our communities across Africa and the UAE.”

Thabiso is also highly illustrated. When I first met him in 2006 he was an Executive Director at the world class Legend Lodges, Hotels & Resorts in Limpopo – the only facility with the extreme 19th hole only accessible by helicopter. He was at the time also serving as the President of South African Golf Tourism Association (SAGTA). He was then quoted as saying: “Despite South Africa being generally recognised by many as a great destination, the golf industry has never spoken with one voice, with one agenda under one banner – until now. We are excited to unite and promote Golf Destination Golf South Africa to bring in substantially more feet to our beautiful country.”

indeed looking at the progress made since then, Thabiso has every reason to go to sleep peacefully. SAGTA, a non profit independent professional membership organization, is fully endorsed by the International Association of Golf Tour Operators (IAGTO). SAGTA’s mission is to promote golf tourism in South Africa, “and in doing so generate sustainable growth in golf tourism to SA and incremental revenue to the country’s tourism industry and to SAGTA’s members from the national and international golf market.”

Thabiso’s company, Fusion Tours & Hospitality, offers a bouquet of services which have been coveted by top leaders in both the public and private sectors.

“I was the Co-MC with the veteran actor, Joe Mafela at the birthday celebration of His Majesty King Mswati. I have programme directed and hosted many golf events that included the Madam Zanele Mbeki’s International Woman Forum Golf Day; The King’s Cup Golf Day in Eswatini; His Majesty King Goodwill Zwelithini’s Golf Days; and Encha Properties’ Fund-raising Golf Day.”

A trained lawyer, his witty oratorical skills are in high demand. “I was the MC at the breakfast sessions of state-owned companies which were broadcast live on CNBC Africa; at the wedding of the CEO of the Association of African Airlines; gala dinner of the SA Medical Association; conferences of the City of Tshwane and the South African Law Society. Yes, I have always provided public relations support to the USA music group, ‘The Temptations’, during their tour in the country.”

Thabiso has partners and associates in the hospitality industry who provide end-to-end hospitality services in travel, tourism and events; event photography and videography; décor and event catering; Hotels; lodges, guest houses and resorts; and golf courses. I also collaborate with The Diplomatic Society; South African National Parks; and Southern African Business Development Forum (SABDF).” His partner, TK Magodielo, was among the many accolades the MC at Justice Dikgang Moseneke’s book launch where former president Thabo Mbeki was a VIP guest on stage.

Besides being the Publisher of Jambo Africa Online, Saul Molobi is the Group Chairman and CEO of the Brandhill Africa group – an award-winning pan African competitive identity and economic development agency brand positions places as viable destinations for tourism and investment while also opening market access opportunities for their service and product brands. It is a member of the African Tourism Board and the World Tourism Network. He’s a DBA in global marketing candidate at the University of Northampton.