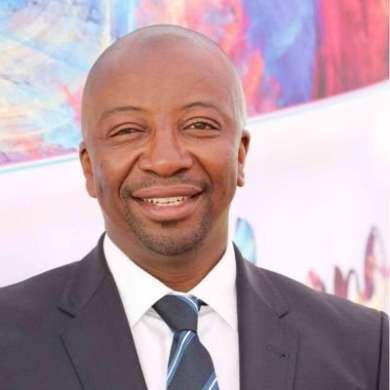 This is a tribute to the late Acting Director-General, Thabo Masebe, by Mduduzi Mbada.

I have known Thabo Masebe for a long time now. It is difficult to let go and accept that he is no more. I have worked with him in the ANC and government nationally and in the province in the Office of the Premier. Thabo Masebe was my leader, mentor, and brother. I do not remember him ever reminding me that he was my leader and senior, what I remember of him, is humility personified. I remember him always saying you are doing well Mdu, let us focus and work. He would say this to keep us going and focused on the task at hand. Thabo was genuine.

I last spoke to Thabo, on Thursday the 14th of April, after the meeting of the war room on clean governance which he chaired as the Director-General. The war room among others focused on the attainment of clean audit results in all municipalities and provincial government departments and entities, paying service providers in 10 ten days and fighting corruption.

The war rooms are established based on learnings from the COVID-19 response and the findings and recommendations of the Mid-term Review report. In this regard, Premier Makhura in the February 2022 SOPA announced that the establishment of the war rooms signifies a shift “From a public Health Emergency to a Service Delivery and Economic Emergency”.

As such under the leadership of Thabo Masebe, the following war rooms have been established and are now fully functional, the War room on Urban Poverty and Hunger; War Room on Jobs and Economy; War Room on Cutting Red Tape; War Room on Fast-Tracking Infrastructure Delivery and Incomplete Projects; War Room on Clean Audits, 10-30 Payment & Transformative Procurement and the War Room on Crime, & Lawlessness.
The war rooms will deal with challenges, in the same manner, that the GPG responded to the Covid-19 pandemic which was a greater sense of urgency, coordination, delivery, partnerships and an emergency mode. The war rooms serve as platforms to bring together government and other stakeholders to give practical effect to social compacting and results-oriented partnerships of “Growing Gauteng Together” in action. Critically War Rooms are problem-solving and will not be constrained by bureaucracy and as such must deal with red tapes in improving responsiveness in addressing challenges of poverty, unemployment, and inequality.
As he always did he led the meeting of the war room on Clean Audits, 10-30 Payment & Transformative Procurement on the 14th of April well despite the challenges and critically he provided solutions to the identified challenges. In honour of Thabo, the task is to continue to ensure that the war rooms are functional and effective.

Thabo Masebe gave me hope that a better tomorrow is possible. Thabo taught us perseverance, he understood that the revolution is thoroughgoing. He understood that patience is a virtue. When he could have chosen a life of being rich, he chose to serve. He liked his finer things such as wine and golf, but he was never extravagant. He was never driven by craft materialism. The mantra and phrase that, from each according to his ability, to each according to his needs, is what defines Thabo Masebe. In that, he contributed to the development of some of us and we owe him a great deal of gratitude and that is to follow in his footsteps and emulate his life of service.

Thabo Masebe chose to be a public servant and a government official to serve the people. When he went into public service he never looked back, he rose through the ranks of the public service and earnest respect that saw him being appointed the Acting Director-General, the highest honour and acknowledgement for him as a versatile public servant. He made serving the people easy and he made it attractive and fashionable. He loved his job, especially the job of public communication, speech-writing and editing documents, which he had done over many years in the provincial government, at Luthuli House and the Union Buildings. When Premier Makhura brought him back from the Presidency to Head Government Communications in Gauteng, it was like a homecoming for Thabo.

In Thabo Masebe, we have learnt that choosing to be a public servant is a simple act of serving and a calling as we used to be told.
Thabo was a political communicator par excellence. He was never a spin doctor, and he would also say don’t lie or spin, tell the truth and put forward the facts consistently. He earned enormous respect from the media and his fellow government communicators of several generations. Premier Makhura has already made the point that, to young government communicators, Thabo was like their professor. He trained and mentored them as government communication mandarins whose role was to build trust and bridge the gap between government and citizens. Many who came through his hands are today the best in their space. He was also able to identify talent in the communication space.

Thabo Masebe understood that waging the struggle and realising the vision of a non-racial, non-sexist, democratic, united, and prosperous society will be achieved by investing in the state. He conceptually and practically understood that a capable and developmental state requires tenacity, discipline, and hard work.

When he took over as the Acting Director-General we spoke about the work at hand, and he said we must continue and work hard to realise the GGT2030 Plan of action. He would almost give me a call before a meeting and even after the meeting at times even speaking longer than the time we were at the meeting. He was dedicated to the work of serving the people.

Even when the Charlotte Maxeke Johannesburg Academic Hospital was burning he never only communicated about it, but he led us well as a team of officials to make sure that we get the hospital back to functioning. Because of his leadership, critical sections of the hospital are open, and we will soon be opening the accident and the emergency unit.
When DG Phindile Baleni was appointed to the Presidency, Thabo took the baton and rose to the occasion, the transition was seamless. He did multiple tasks being the head of communications and the head of administration. He worked with scientists; he work with all public servants. He led us at the War Room and the executive management of the Office of the Premier excellently.

To be a public servant is to be like Thabo Masebe, who has served with distinction. Thabo Masebe has brought back the image of a public servant, a servant who understood the mantra of Batho-Pele. We must honour Thabo Masebe by serving with integrity, distinction, discipline, and hard work.
We love you Thabo, we will miss you! We will miss the many days and nights we spent together drafting and editing government documents and seminal speeches. Rest assured Thabo Masebe that we will continue to work hard as would have guided! Thank you for your leadership.

********
Mduduzi Mbada is the Head of Policy in the Office of the Premier in Gauteng Province.