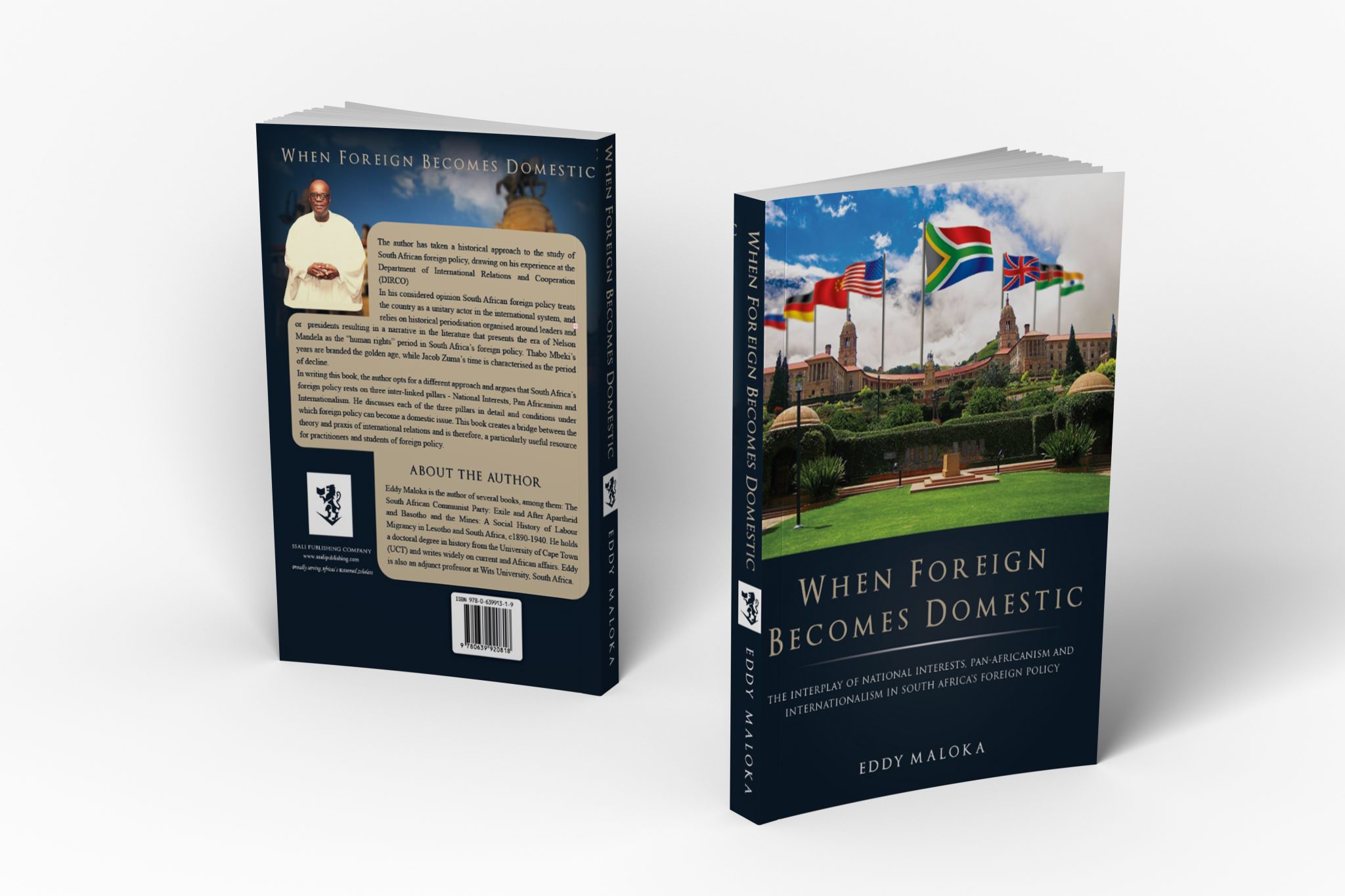 The following is an an extract of the last chapter titled” Conclusion: The next step?” of the recently published book by Prof Eddy Maloka: “When Foreign Becomes Domestic”

With the foregoing account in the earlier pages, what, then, is the core message? This book has attempted to put forth a historical approach to the study of South African foreign policy, drawing on the author’s experience at the Department of International Relations and Cooperation (DIRCO), and the methodology developed in the academic literature on foreign policy analysis. The view I take is that South Africa conducts its foreign policy as an actor in the international system through its diplomats who are also actors in their own right. I argue that most of the literature on South African foreign policy treats the country as a unitary actor in the international system, and relies on historical periodisation organised around leaders and presidents. As a result, they have entrenched a narrative in the literature that presents the era of Nelson Mandela as the “human rights” period in South Africa’s foreign policy. Thabo Mbeki’s years are branded the “golden age”, while Jacob Zuma’s time is characterised as the period of “decline”.

However, this book opts for a different approach and argues that South Africa’s foreign policy rests on three inter-linked pillars – National Interests, Pan Africanism and Internationalism. I discuss each of the three pillars in detail as well as the conditions under which foreign policy can become a domestic issue. With its modest goal of creating a bridge between the theory and praxis of International relations, it coukd be a useful resource for practitioners and students of foreign policy.

The international system had been both an opportunity and a constraint on South Africa, the country it embraced after the end of apartheid, gave it recognition, and allowed it to express itself on the African stage as a regional actor. In this new role, South Africa has to contend with two competing perspectives of the contemporary international system – the West’s “liberal order” which expects states to behave themselves and conform with the dominant order, and that of the non-Western world which dreams of a “better” and transformed world that is liberated from the hegemony of the North.

South Africa is an African country and so is its foreign policy formulation and implementation. It cannot escape its African contexts and the factors that determine the foreign policy of post-independent African states. After apartheid, the country had to find its place in Africa and define its relations with the African Union (AU) and the Southern African Development Community (SADC). It has Western powers to contend with as a factor in the international system and multilateral organisations, and in the North/South partnership relations. It has its economy with its own vulnerabilities. China and India are now featuring prominently in its foreign policy radar.

Thus, the development of South African foreign policy after apartheid went through three stages. First, was the institutional reconfiguration to transform apartheid institutions and create the erstwhile Department of Foreign Affairs and other state entities in the governance capacity. This culminated in the strategic foreign policy reorientation programme undertaken by the country in 1996, comprised of an assessment of the global environment and the place of South Africa in it.

Then, from 2000, the African Renaissance and the African Agenda took centre stage, with Thabo Mbeki at the helm. It was during this period, between 2005 and 2012, that South Agri a invested it’s soft power energy in the outreach to the African Diaspora. However, from 2009, thanks to the introduction of an outcome-based system and the National Development Plan, the country’s foreign policy gradually shifted towards greater emphasis on economic diplomacy, the narrative of an Africa-centric foreign policy slowly fading into the background, which existed more in proclamations than in actions.

Formulating foreign policy is one thing, but implementing it is as much bigger challenge, requiring state institutions, political leadership, and a civil service skilled in diplomacy. Therefore, an attempt is made in this book to open and enter the black box behind foreign policy making in South Africa, to study the actors, setting, and processes. The book gives due attention to this governance architecture for planning, accountability, monitoring and evaluation in the development of South African foreign policy and the role played by DIRCO and its predecessor, DFA.

It gives credit to Thabi Mbeki for his pioneering role in establishing the post apartheid governance capacity for policy planning, monitoring and evaluation in the form of the multi year Medium Term Strategic Framework

(MTSF) with a corresponding Medium Term Expenditure Framework (MTEF), as a tool for planning and the allocation of fiscal resources to state entities, with the departments expected to cascade the MTSF to their respective environments through corresponding Strategic Plans which were annualised through performance plans for the year and reports on work done. At the level of cabinet, five clusters were created by the Mbeki administration for synergy and coordination, with DFA put together with defence and intelligence service u der the International Relations, Peace and Security (IRPS).

Jacob Zuma built on this innovation when he assumed office in 2009 and reinforced it with an outcome-based monitoring and evaluation system, with delivery agreements signed between the president and his ministers, coupled with a 2030 vision in the form of the National Development Plan as a long-term plan to be operationalised through the MTSF. Mbeki’s cabinet clusters were revised; the IRPS reconfigured to include trade and renamed International Cooperation, Trade and Security(ICTS). Thanks to the introduction of the outcomes-based system with 12 outcomes, foreign policy was placed under Outcome 11 whose objective is “Creating a better South Africa and contributing to a better and safer Afriva in a better world.”

Foreign policy decision-making in South Africa takes place at three centres of power – the presidency, DIRCO and at the Luthuli House involving a myriad of actors….

The shift to economic diplomacy bias, post 2008 is discussed in detail. Thanks to this development, South Africa became more concerned with extracting economic benefits from its foreign policy, even in its peace and security work on the continent…

International solidarity is covered at great length. The book shows how it became integrated into foreign policy of the new South Africa to promote human rights and peace in the world and support the struggles for justice and the right of nations to self determination…

The road ahead will not be an easy one for South Africa. Its foreign policy activism will not go unnoticed or unchecked. The growth and expansion of its economic potential will not be good news for everybody. Therefore, the country must find a way to manoeuvre itself in pursuit of its interests in the “liberal world order” and position itself strategically in the transition to what could result in a post-West world order. As this book shows, the current trajectory characterised by a shift away from an Africa-centric foreign policy, will weaken, rather than strengthen South Africa’s posture and strategic positioning in the world.

Then, what should the next steps be? This book cannot prescribe what South African foreign policy Akers should do. It can only offer a commentary snd modest suggestions.

First, South African foreign policy without Africa and the AU at the centre has lost its identity…

Second, at the organisational level, DIRCO needs to rethink how it is configured internally. The merger of the two branches – Multilateral (focusing on the United Nations) and Africa  Multilateral (concentrating on the AU) – to create a new branch called “Global Governance and Continental Agenda”, has weakened South Africa’s once active role in the AU. The merger negatively impacted the department’s quality of work on AU matters abs associated administrative support. Merging African multilateral issues with the United Nations was arguably unjustified and even confusing to DIRCO staff…

Third, is the Luthuli House factor. The impact of the ANC elective conferences on the South African civil service has not been adequately studied. Yet it is a big factor affecting service delivery, staff Morake and leadership succession planning within the public service. The impact happens when the Executibe authority – a minister in this case, had a personal stake in the process towards the elective conference as a candidate or an active participant in factional battles over the presidency of the ANC. Sone Minister’s are skilled enough to protect the department and the civil service from the ANC’s internal politics, but others do the opposite, and actively involve the government administration and bureaucracy in their personal political battles. This is a factor that played a big part in the decline of South Africa on the global stage at the administrative collapse of DIRCO.

South African foreign policy is at a crossroad. It can continue this downward spiral, without an identity and the activism that South Africa was once known for in the world. Or it can use the experience of the last few years as a lesson and return to the basics of its mission which is to serve the Africa continent and strive for a better world.

Prof Eddy Maloka is the CEO of the African Peer Review Mechanism (APRM). To order your book, send an email to Rose Ssali, Managing Director of Ssali Publishing House at ssalirose@gmail.com