Ray Phiri climbs aboard the steam train: A life in C-minor 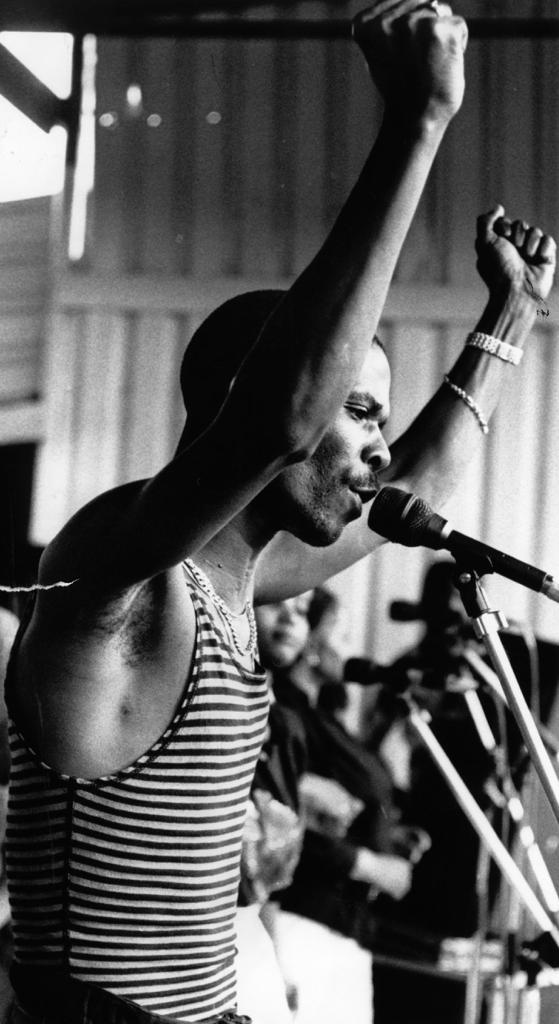 Half-a-decade after the transitioning of one of South Africa’s renowned and most storied artists – composer, band leader, cultural activist and social justice warrior – Ray “Chikapa” Phiri into the sacred beyond, an exhibition produced by his Art Institute invites the public into an interactive exploration of his work.

The first volume in a series of artistic exploration of the life, work and symbolism of the artist, the photo exhibition opened on the week of South Africa’s 28th Freedom Day anniversary.

The educational exhibition is teased out of various strands such as family archives, public archives, stage costume, text, album covers, personal letters, sonic narratives and personal testimonies by those with intimate knowledge of the artist.

PREMISED on the material and history of ‘The Family Photo Album’ as the first step towards private/public self-curating, therefore self-archiving, audiences are invited to a visual browsing through Ray Phiri’s personal archive which he left for the Ray Phiri Art Institute, as well as the public archive.

As a private, social and artistic artefact, ‘The Family Album’ has had a powerful role in how black society in general, and family units in particular, have navigated their places within what is called “Modernity.”

Therefore it is a historical visual memory depository, documentation and archival tool which every Black family kept for generations. Conceptually, the discourse around what, on the one hand is an intimate, personal and, on the other, a public form of visual documentation, is what this exhibition aims to explore. It is not a media report.

The aim here is not to “reveal” or provide a “scoop” as much as an invitation to audiences to share their memories of Ray “Chikapa” Phiri, in real time, as they walk right into his living album.

Who Owns the Archives?: A South African Saga

The process of recreating this album or creating a new one out of the pages of the past, has been a complex and enriching journey on its own in our research. Without requisite resources for this specific challenge we nonetheless doubled our efforts to track down and identify individual photographers who shot and printed what were “snaps” some of which are included here.

However, due to the history of media ownership in this country, a history replete with dispossession and erasure, we discovered it was a common and “accepted” human resource practice for media employers to own their staff’s individual creations. As a result, individual photographers contractually forfeited their work to their employers.

The story of Black public archives and contributors without which there would not be any archive to speak of, is a tragic and complex one. While the legacy of the early 1900s to the mid-1990s was of dispossession and unfair intellectual and creative labour policy, its impact on contemporary researchers, curators, filmmakers and scholars has been stultifying at best.

We recognise that Ray Phiri’s legacy should not be the site to resolve historical knots. But to an extent that Ray Phiri was also a major cultural activist, and the challenges that arose while trying to locate individual ownership of the work developed and exhibited here are an issue he would have had a say in.

They are resonant with the spirit of Ray “Chikapa” Phiri and the culture wars his work was steeped in. Although it’s a task that requires time (years, to be precise), resources and expertise we are still committed, in the here and now to tracking all the photographers, including the deceased, and help the media companies return photography rights to their rightful makers. As part of our commitment to redress we are inviting photographers and their estates to come view, celebrate the moment with us and claim their rights or correct any misattribution. We are also putting in plans to raise and set aside a small budget to compensate those who might not have been originally compensated during their loss of intellectual property.

This is an issue that preoccupied the work, research and curatorial mission of this very exhibition curated by the acclaimed essayist, biographer, public arts director and film maker Bongani Madondo. This curator is known across the continent and globally for his journalism, knowledge productión, archival research and photography criticism.

See Me As I See You

The curator’s rigorously informal approach to this exhibition draws inspiration from the review subject himself. Ray “Chikapa” Phiri – the person, artist, activist, friend and producer – brought a sense of openness, had a left field take on cultural and political issues, was accessible and yet a philosophical soul given to deep reflections.

It is that energy this show aims to tab into. This is not a traditional museum exhibition. This is an educational introduction on what it might entail to create a template to honour iconic and historical figures in such visual modes as photography and stage costume.

Therefore the conceptual decision arrived at was to create an experiential visual and interactive, material and metaphoric scrap book.

“To pull off a comprehensive photo survey of a single character known for performance collaboration with others from childhood until his last breaths on earth requires a developmental approach as well as years of collaboration with photographers, institutions and a governmental and corporate support,”
Madondo observed.

“Ray Phiri did not have the luxury of a personal photographer or videographer, which poses both a challenge and creative opportunity to both the curatorial process, family and to the public to ask themselves: Which Ray ‘Chikapa’ Phiri do you want right now and why?”

In many ways, staging the exhibition in Phiri’s hometown of Mbombela is also an act of retrieval, reclamation and homecoming. Therefore, the structural challenges of the space throws up creative, aesthetic and collaborative possibilities one does not encounter in mainstream galleries and museums, and that’s the joy of it.

Working within limited means also poses a set of questions such as what does the ethos of DIY (do it yourself) mean when the subject of the exhibition was such a solid, national and global cultural force.”

The making of a legend

Born on 23 March 1947, two years in the residues of the second World War (WWII), in (specific farm or village or township please).
At the age of three, his father, Chikapa senior, passed on and his mother, Minah, married a Malawian immigrant farm worker Kanyama “Justnow” Phiri, who raised him and his sisters as his own.

Chikapa grew up with a calcium deficiency condition. It resulted in his slow bone development, and, ultimately his slim Mick-Jagger-kind of physique.

The iconic broadcaster, Max Thamagana Mojapelo, writes in “Beyond Memory: Recording the History, Moments and Memories of South African Music”, that “Phiri spent nine years at the Crocodile Valley Hospital as a result of this deformation, and learned a lot about life from a Catholic priest, Father Bernard.”

However, Chikapa’s condition proved to be an unforeseen gift in his future endeavours: as a working entertainer from an early age, he accompanied his stepdad to local performance gigs where he demonstrated a catchy syncopated style all his own.

Playing an acoustic style of new, East African dance music – part traditional songs, part new dance craze rippling throughout the world and Post Colonies of Africa – Justnow Phiri was a local celebrity while he kept his job as a farmhand. There was practically no show business or industry to speak of beyond the metropolises of Johannesburg, Harare (then Salisbury) and Maputo (then Laurenzo Marques).

A freak accident left Justnow’s fingers deeply scarred and the old man exited the stage. Young Chikapa inherited his old man’s guitar. The guitar would be the instrument less of choice as of a “calling”.

It would also be his composing tool from formative years, right through a thirty year star-studded global career.

With his guitar strapped on, the dancing mantis from Nelspruit fiddled, strummed, sang and leapt into robotic motions as though a wired, mimetic creation: A rubber body bender, a rock ‘n roll star, and a township acrobat who turned ‘n twisted his lean frame was simply attenuated in shapes diametrically aligned with the rhythm of the band’s sound.

He joined a band, The Five Boys, as a dancer in 1962. By 1967 they were backing the hottest African female quartet of the time, Joyce Mogatusi’s “Dark City Sisters”, with whom they went on a national tour for two years.

A year later in 1968 right in the middle of powerful global and local currents such as Miriam Makeba’ s second exile to Guinea Conakry, Hugh Masekela’s global hit, Grazing In the Grass, Paris red and youth social revolution and, in South Africa, the birth of the Black Consciousness movement out of historical shards of a centuries of Pan Africanism flows, and mobility.

Musically and, sartorially, this was also a year charged with visual and stylistic innovations. A period where major musicians moved from merely bandstand popularity into global, branded products.

It is also the moment of Motown’s Hitsville epic growth into a global cross-over sound factory. While down in South Africa the year birthed the beginning of the Black urban modernist styles of township “soul music”, Ray Phiri joined “The Jabavu Queens” mainly as a dancer. His body “contortions soul jive” earned him the name “Mfana Sbungu” – the Worm-home boy danced like he had no bone in his body.

It was in 1970 that Phiri joined his cousin’s band “Amazim-zim” (a cannibal tribe), later refashioned into an English name, “The Cannibals”. The group comprised his homeboys – the drummer, Isaac Mtshali, and bassist, Jabu Sibumbe – both of whom had been dancers in Nelspruit youth bands, among others.

On the advice of the great West Nkosi, a major “mbaqanga” producer, “The Cannibals” welcomed the East Rand’s singing sensation Jacob “Mpharanyana” Radebe.

The Movers were the other co-pilots of this nascent, keyboard and singing guitars baked, electric Black pop nouveau wave raging across southern Africa. By then a bassist, Sibumbe, joined “The Movers” whereupon he met an ex-“Harari” keyboardist, Lloyd Lelosa, and Charlie Ndlovu.

In 1981, the two outfits toured Nelspruit and shared the stage.

In essence, the two rival bands were the architects of the early 1970s guitar attack, hypnotic dance sound, “bump jive”, later marketed overseas as “The Indestructible Beat of Soweto “.

According to Mojapelo, “at the end of the show, the Nelspruit boys teamed up with their fellow son of the rising sun, Sibumbe, and his keyboardist friend from “The Movers” to create a new outfit. They named the new musical formation, “Stimela”.

The exhibition at hand invites more stories, and more visual artefacts. Anyone who has something to share about Ray “Chikapa” Phiri is invited to share their stories during the course of the exhibition.

The “broader project here is to encourage fans, friends, nuclear and public families to claim, weave and share their personal memories of Ray “Chikapa” Phiri’s legacy in any which way they so desire.

“Ray ‘Chikapa’ Phiri’s work belongs to all those who were touched, and those open enough to discover, and rediscover his work in the future,” Ray Phiri’s director, Rabelani Phiri concludes.

The realisation of the exhibition was made possible by the generous sponsorship and support by the Department of Sport, Arts and Culture’s “Mzansi Golden Economy” program, the City of Mbombela and the Ray Phiri Art Institute.

Here’s SABC’s coverage of the exhibition: