From the SADC pages: ”SADC and SACU sign MoU to strengthen cooperation” plus other stories 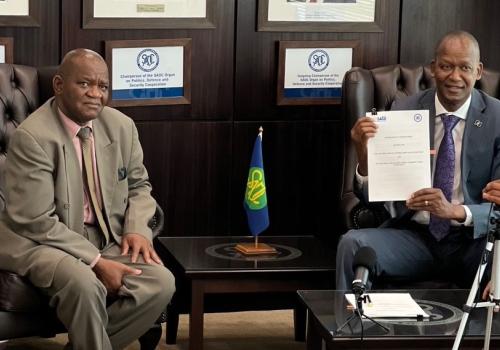 The SADC Executive Secretary H. E Mr. Elias M. Magosi and the SACU Executive Secretary of SACU, Her Excellency Paulina M. Elago, signed the MoU, which provides a framework upon which the Parties will collaborate on various programmes and activities as set out in the agreement.

Through the MoU, SADC and SACUs will work together to promote close cooperation and consultation on matters of mutual interest and coordinate their efforts to strengthen collaboration to promote industrialisation; regional and international trade; and ultimately contribute to the economic and social development of their Member States.

The implementation of the MoU between SADC and SACU will facilitate exchange of information, related to Trade and Industry,Economic and Finance, Trade Facilitation and Rules of Procedure and practices of Institutions. Under Trade and Industry, particular attention will be placed on Industrial development; development of Regional Value Chains; funding of Regional Value Chains Projects; long-term Sugar Market Arrangement and support to trade negotiations and implementation of Trade Agreements.

Regarding cooperation in Economic and Finance, the MoU will focus on the implementation of the Macroeconomics Convergence targets and the monitoring of the performance of the indicators; exchange of information on the Harmonised Consumer Price Index; and exchange experiences and research work on macroeconomic-related studies.

His Majesty King Mswati III of the Kingdom of Eswatini says the Southern African Development Community (SADC) must accelerate implementation of programmes that aim to increase the volume of trade among Member States and thereby improve the livelihoods of the citizens of the community.

His Majesty King Mswati was speaking when he received a courtesy call from the Executive Secretary of SADC His Excellency Mr. Elias M. Magosi, on 11th October 2022.

The courtesy call is part of the SADC Executive Secretary’s programme to introduce himself to the Heads of State and Government in the region, share his ideas about a sustainable approach to expedite regional integration, achieve peace and security, as well as seek guidance and direction from the region’s leadership. The SADC Executive Secretary has so far paid courtesy calls on their Excellencies for the Democratic Republic of Congo, the Republics of Botswana, Malawi, Mozambique, South Africa, Namibia, Zambia and Zimbabwe.

The SADC Executive Secretary highlighted that, among his priorities during his tenure, was to unblock the bottlenecks which slowed regional integration, industrialisation and easy access to markets in the region. “A lot of good Protocols and legal instruments have been developed to facilitate deeper regional integration and to ensure that SADC achieves its purpose, but the region has gaps which affect the pace of implementation on what has been agreed”, H.E. Magosi said.

H.E. Magosi said that a number of the SADC Protocols are not in force as they are yet to be acceded to, or ratified by the required two-third majority, and that he has started to engage Member States to support them in their processes to ensure that the Protocols become operational.

His Majesty King Mswati III welcomed the SADC Executive Secretary, and his proposals, and assured him of the support of the Kingdom of Eswatini on his ideas and the proposed approach to expedite regional integration and industrialisation in the Community.

“Studies still show that there is not much intra-regional trading taking place within our region, so we need to change that, and develop programmes that will promote easy and seamless trading among the countries so that we improve our economies and the lives of our people,” His Majesty King Mswati III told the SADC Executive Secretary.

During the meeting, His Majesty the King, who was accompanied by the Prime Minister, His Excellency Cleopas Sipho Dlamini, Her Excellency Senator Thulisile Dladla, the Minister of Foreign Affairs and International Cooperation, Hon. Pholile Dlamini-Shakantu the Minister of Justice and Constitutional Affairs and senior officials from the Government of the Kingdom of Eswatini, updated SADC Executive Secretary on social, economic, peace and security in the Kingdom.

The SADC Executive Secretary was accompanied by the Director for the Organ on Politics, Defence and Security Affairs, Mr Jorge Cardoso, the Head of Communications and Public Relations Ms Barbara Lopi, and Mr Wazha Omphile the Project Management Officer in the Directorate for Policy Planning and Resource Mobilisation the SADC Secretariat.

H.E. Magosi is the seventh Executive Secretary of SADC who assumed his position on 1st September, 2021, following his appointment at the 41st SADC Summit of Heads of State and Government held in Lilongwe, Malawi in August, 2021.

Communities living along Metsimotlhabe River in Botswana are excited with a climate-resilient Integrated Water Resources Management (IWRM) project that seeks to strengthen their resolve against effects of climate change and improve their livelihoods.

The European Union (EU)-funded project, which is being implemented under the Southern African Development Community (SADC) Secretariat and the Global Climate Change Alliance Plus (GCCA+) programme, seeks to address these challenges and ensure that various groups along the river benefit from the use of the river. Global Water Partnership Southern Africa is implementing the project on behalf of SADC.

During an engagement with communities around Metsimotlhabe River on 16th September 2022, representatives of women, youths, men and vulnerable groups expressed optimism that the project would resolve some of the challenges that they face.

Metsimotlhabe Chief Kgosi Raphael Mmipi welcomed the proposed pilot study and was optimistic that it would give the village hope of mitigating climate change effects.

“The river integrity has been degraded over the years., dating back to the 1980s. The river used to be home to a number of plants and animals, and these are not there anymore. We also used to have hand dug wells to water our livestock and this is no longer possible as the river does not have sand and the river’s aesthetic value has decreased,” said Chief Mmipi.

“We need stringent measures against illegal miners and establishment of a Catchment Management Committee to monitor and protect the Metsimotlhabe River,” said Mr Moamogwe.

The women’s group representative, Ms.Tankanyane Chibitswane, said  that indiscriminate dumping of sewage waste in the river has caused pollution and suggested that greywater re-use be adopted at household level for back-yard horticultural activities.

On their part, the youth represented by Taboka Makhiwa, reiterated that the lack of education and skills on climate smart agriculture saw many youths uninterested in agricultural activities. He mentioned that training, skills development, formation of youth clubs and incentives will go a long way in youth active participation.

“Interventions such as the use of renewable energy sources such as solar powered boreholes and the use of water efficient mechanism through drip irrigation could see many youths getting involved in climate resilient IWRM in the Metsimotlhabe Village.”

The meeting discussed climate smart agriculture such as crop rotation and animal manure application; rainwater harvesting and solar powered boreholes as some of the solutions that the communities can implement to protect the river and the banks.

The Botswana Water Partnership Programme Coordinator Ms. Laura Danga emphasised the need for a participatory approach to identifying challenges and solutions for climate resilient IWRM interventions by engaging all stakeholder representatives of the men, women, youth and vulnerable groups in the Metsimotlhabe Village.

“Your continued and unwavering participation; especially from women and youth groups, will bring about concerted efforts in building climate resilient IWRM and ownership to the pilot project that will improve livelihoods in the Metsimotlhabe Village,” said Ms Danga.

Ms. Saniso Sakuringwa from the Department of Water and Sanitation suggested that when the Metsimotlhabe Pilot Study successfully takes off, other villages in Botswana can learn from this project.

The project is part of the European Union-funded Intra African, Caribbean and Pacific (ACP) Global Climate Change Alliance Plus (GCCA+),a programme which aims to increase the capabilities of SADC Member States and countries in the ACP region to mitigate and adapt to the effects of climate change, and have their voices better heard in international climate change negotiations.

In a statement to mark the year 2023 as the International Year of Millets (IYM), the SPGRC also encouraged food scientists to value-add millets and make them part and parcel of peoples’ daily meals. It further urged national gene banks  to make available traditional millet varieties for use in breeding programmes, research, and direct consumption at household level to address nutritional gaps in the SADC Region.

The theme for the International Year of Millets was proposed at the UN General Assembly and endorsed by Members of the Governing Bodies of FAO, including the 160th Session of FAO Council and the 41st FAO Conference. This is because millets have proven to be climate resilient and highly nutritious yet still remain relatively undervalued, and under-utilised cereal crops.

Millets are a group of cereal grains that belong to the Poaceae family, commonly known as the grass family. Despite being widely perceived as crops in terminal decline in favour of maize, sorghum and millets were in fact among the first plants to be domesticated and still serve as a traditional staple food in Sub-Saharan Africa and Asia with both continents constituting the vast majority (over 90%) of millet production worldwide. Compared to other cereals like maize and rice, millets have the ability to grow in dry and marginal environments clearly making it a crop with an important role in the future food and nutritional security.

Millets are often called “nutri-cereals” with multiple-use properties because of their high nutritional content, which includes protein, fibre, micronutrients and phytochemicals. Millet is a versatile foodstuff that contains at least 9% protein, a range of amino acids and more oil than maize and more digestible (11%  fibre) than sorghum (6.7% fibre) as it contains no tannins, a bitter-tasting brown substance. Millet is consumed as a whole grain like rice, cracked or as a flour in flatbread, fermented foods, porridges, couscous, beverages and snacks. It is also a gluten-free seed grain, high in energy but with a low glycemic index (low GI) which is an important property in managing type 2 diabetes as it does not raise blood sugar rapidly. It is high in fat, protein, iron, zinc and phosphorus (P) making it essential for bone growth.

As an animal feed, millet is grown to produce silage, hay or directly grazed when green. As a fodder for animals, the seeds can be fed to poultry, the green plant used for grazing or used for silage and hay production. The dry plant material can also be used to weave baskets, for thatching and to build light fences especially in rural communities.

Millets are very resilient crops, highly suitable for cultivation under adverse and varying climatic conditions. However, despite these clear advantages of climate resilience and nutritional benefits, millets remain relatively undervalued and underutilised, with its production being on the decline in the SADC Region.