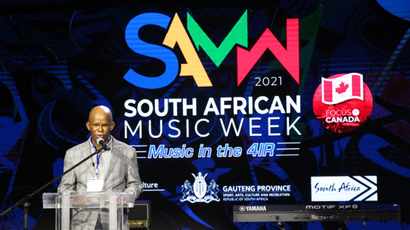 The inaugural launch of SA Music Week in January 2021 ushered a new era in putting South African music on the global stage. For the first time here is an annual event that brought Canada’s music industry experts and government in a reciprocal and bilateral engagement with their South African counterparts.

The event’s signature is to do a spotlight on a different SADC country as a potential export market for music productions – covering all its value chains and the sub-sectors in which music is used to enhance aesthetics like in cinema, theatre and other cultural variations. The three day event that covers conferencing, festival, tech expo, B2B and industry awards is supported by South Africa’s Department of Sport, Arts and Cukture (DSAC) and the government of the Gauteng City Region – which contributes 35% of the country’s GDP.

As part of a five year plan, SAMW is now preparing its next instalment in September 2021 with a spotlight on the member states of the Southern African Development Community (SADC) – which is made up of 16 countries with a household population of over 300 million.

With its theme of music in the 4IR, SAMW seeks to technologically disrupt the music industry’s echo system by defining how content is created,  consumed and distributed in the digital age. The event is definitely a convergence of the creative industries with tourism and ICT.

For more information on how you can be part of this exciting conference,  and to discuss the packages below, please contact Michael Moeti, the founding CEO of SAMW  at +27 65 853 8770 or website: www.samw.co.za.

The following is video clip in which the SAMW CEO was interviewed: