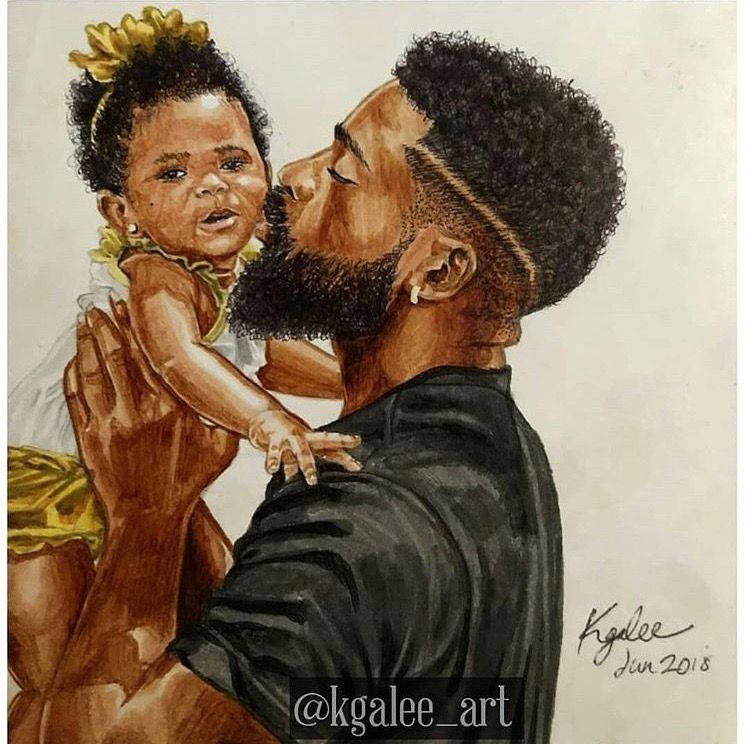 In celebrating our Father’s Day on Sunday in South Africa, Jambo Africa Online’s Publisher, SAUL MOLOBI, will be visiting the eternal resting place of his father, Samuel Molobi, in New Eersterus, Hammanskraal (40 kilometres north of Pretoria), accompanied by Tshiamo and Alice (his two children who live with him). For preparation of this pilgrimage, he invaded his studyroom – a place of refuge for him from “the world… (that’s often) too much with us”, as William Wordsworth mused) – to draw inspiration from soul-caressing and heart-massaging words, sounds and images crafted by some of the intellectually-gifted comforters we’re blessed with.

Although in the 5 March 2021 edition of this news portal we brought you a news feature covering the profile and artworks of Kgalalelo Gaitate (see https://www.jamboafrica.online/palate-for-cross-cultural-visual-dialogue/), Saul discovered her new masterpiece that wasn’t featured in the article – and it’s because of this and the topicality and timorousness of its theme that’s we have made it a cover photo for this article. Almost suffocating by my own imperfections as a father, I don’t have sufficiently perfect words to eloquently describe the emotions, dreams and aspirations that this Kgalalelo’s masterpiece evokes in me except to say it is that which my father stood for: God-fearing, humility, sanity, care, familial, compassion, fairness, conscientiousness, apathy, responsibility, accountability, trustworthiness, respect, forgiveness and above everything else, love. Yes, I aspire to be half the man he was – and anything above that will be a bonus.

To refresh your memory about who Kgalalelo is, let me borrow from the previous article. Kgalalelo, affectionately known as Kgalee, is a self-taught South African visual and corporate artist. From the very tender age of three, her parents and crèche teachers noticed an embedded creative nature which she was encouraged to nurture. Teaching herself to draw, from various disciplines such as observing television cartoons, colouring books, illustrated story books, magazines and actual people, she finally began to draw in pen, as she found this medium to be much more striking than pencil. Honing her gift at the National School of the Arts High School in Johannesburg, she was then exposed to various media such as watercolour, gouache, oil paint, etching and marbling.

Her latest artwork we’re exhibiting on the cover, helping to deepen conceptualisation of what fatherhood means, mesmerised my mind and I then look out for quotable quotes that could best caption her artwork. Here follows a sample of them.

“You don’t raise heroes, you raise sons. And if you treat them like sons, they’ll turn out to be heroes, even if it’s just in your own eyes.” – Walter M. Schirra, Sr.

“Some dads liken the impending birth of a child to the beginning of a great journey.” – Marcus Jacob Goldman

“One father is more than a hundred schoolmasters.” – George Herbert

“Sherman made the terrible discovery that men make about their fathers sooner or later . . . that the man before him was not an aging father but a boy, a boy much like himself, a boy who grew up and had a child of his own and, as best he could, out of a sense of duty and, perhaps love, adopted a role called Being a Father so that his child would have something mythical and infinitely important: a Protector, who would keep a lid on all the chaotic and catastrophic possibilities of life.” – Tom Wolfe, The Bonfire of the Vanities

“The best way of training the young is to train yourself at the same time; not to admonish them, but to be seen never doing that of which you would admonish them.” – Plato

“The nature of impending fatherhood is that you are doing something that you’re unqualified to do, and then you become qualified while doing it.” – John Green

“One of the greatest things a father can do for his children is to love their mother.” –Howard W. Hunter

“To a father growing old nothing is dearer than a daughter.” – Euripides

“If there is any immortality to be had among us human beings, it is certainly only in the love that we leave behind. Fathers like mine don’t ever die.” – Leo Buscaglia

“That is the thankless position of the father in the family — the provider for all, and the enemy of all.” – J. August Strindberg

“Every father should remember one day his son will follow his example, not his advice.” – Charles Kettering

“Son, there are times a man has to do things he doesn’t like to, in order to protect his family.” – Ralph Moody

“A boy needs a father to show him how to be in the world. He needs to be given swagger, taught how to read a map so that he can recognize the roads that lead to life and the paths that lead to death, how to know what love requires, and where to find steel in the heart when life makes demands on us that are greater than we think we can endure.” – Ian Morgan Cron

“My father didn’t tell me how to live. He lived and let me watch him do it.” – Clarence Budington Kelland

“When you’re a dad, there’s no one above you. If I don’t do something that has to be done, who is going to do it?” – Jonathan Safran Foer, Here I Am

“‘Why do men like me want sons?’ he wondered. ‘It must be because they hope in their poor beaten souls that these new men, who are their blood, will do the things they were not strong enough nor wise enough nor brave enough to do. It is rather like another chance at life; like a new bag of coins at a table of luck after your fortune is gone.’” – John Steinbeck, Cup of Gold: A Life of Sir Henry Morgan, Buccaneer, with Occasional Reference to History

“There are many kinds of success in life worth having. It is exceedingly interesting and attractive to be a successful business man, or railway man, or farmer, or a successful lawyer or doctor; or a writer, or a President, or a ranchman, or the colonel of a fighting regiment, or to kill grizzly bears and lions. But for unflagging interest and enjoyment, a household of children, if things go reasonably well, certainly makes all other forms of success and achievement lose their importance by comparison.” –Theodore Roosevelt

“Father! To God Himself we cannot give a holier name.” – William Wordsworth

“We think our Fathers Fools, so wise we grow; Our wiser Sons, no doubt, will think us so.” – Alexander Pope

“His values embraced family, reveled in the social mingling of the kitchen, and above all, welcomed the loving disorder of children.” – John Cole

“It is easier to build strong children than to repair broken men.” – Frederick Douglass

“A girl’s father is the first man in her life, and probably the most influential.” –David Jeremiah

“Fathers, like mothers, are not born. Men grow into fathers and fathering is a very important stage in their development.” – David Gottesman

“Father of fathers, make me one,
A fit example for a son.” – Douglas Malloch

“Being a great father is like shaving. No matter how good you shaved today, you have to do it again tomorrow.” – Reed Markham

“It is easier for a father to have children than for children to have a real father.” –Pope John XXIII

“When I looked at you first I saw not your mother and me, but your two grandfathers . . . and, as my father, whom I loved a great deal, had died the year before, I was moved to see that here, in you, he was alive.” – Peter Carey

“Dads are most ordinary men turned by love into heroes, adventurers, story-tellers, and singers of song.” – Pam Brown

“‘Father’ is the noblest title a man can be given. It is more than a biological role. It signifies a patriarch, a leader, an exemplar, a confidant, a teacher, a hero, a friend.” – Robert L. Backman

“The father who does not teach his son his duties is equally guilty with the son who neglects them.” – Confucius